Environmental Elements in Pavilions and Entertainment at Expo 98

Expo 1998 Lisbon distinguishes itself from previous Expos by careful attention to detail at the site. Exhibits that illustrated the concept of sustainability and emphasised the need to preserve the oceans for future generation were part of many pavilions. Water was reflected throughout the site and from a design standpoint was well-integrated into the public space of the Expo.

During the Expo, some of the most popular attractions were the Virtual Reality, Oceans Pavilion, Knowledge of the Seas, and Utopia, all sponsored by Portugal. The Portuguese Pavilion was also one of the most visited, while Virtual Reality added an additional ticket that was likely to discourage crowds. As in earlier exhibitions, commercially-sponsored pavilions were also popular. Portuguese Telecoms, Sony, and Microsoft had some of the best-reviewed pavilions.

Post-Expo, the Oceans Pavilion continues to be the major tourist attraction of the site. The pavilion sits in the centre of a boat basin, appearing to float above the surface of the water. Inside, the multi-story salt water tank at the centre of the complex draws visitors in. More serious didactic displays are carefully organised in each of the wings of the building.

Unlike World Expo 1992 in Seville, relatively few of the pavilions were designed by internationally-known architects. The exceptions are those buildings sponsored by the host including the Portuguese Pavilion, designed by Álvaro Siza Vieira; Oceans designed by Peter Chermayeff; the Knowledge of the Seas Pavilion, designed by João Luís Carrilho da Graça; and the Utopia Pavilion by SOM with Regino Cruz Architects. Another important design feature of the site was the Oriente Train Station, designed by Santiago Calatrava. These buildings were all programmed for significant post-Expo uses and perhaps this approach gave more weight to the building itself rather than the displays within. The Oceans Pavilion, conceptualised as continuing with the same use, had some of the most complex programming of the Expo. The Oriente Station, the heart of a transportation node was an organising point for the entire site, both pre- and post-Expo. 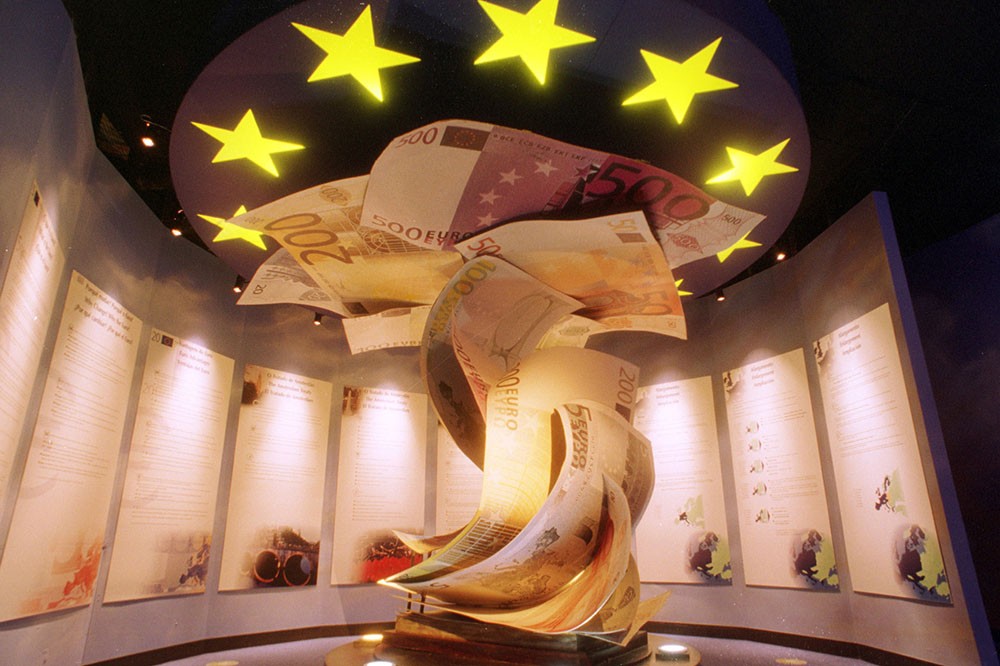 The contents of the national exhibits demonstrate a variety of innovations in exhibit programming. The architecture of the national pavilions reflected notable innovations in presenting a display. The design of each façade and position of buildings garnered attention. Most notable in this respect are the appearance and orientation of the Knowledge of the Seas, Future, Oceans, and Utopia pavilions. In addition, all of the Portuguese pavilions addressed the typical problems of waiting areas and crowd control by using passive displays of images and video to help structure the visit and establish a pace through the display areas. The participatory experiences at the core of each pavilion, though, were the innovations of interest that attracted lines and more crowds to manage.

"The Knowledge of the Seas Pavilion incorporated kinetic experiences for the visitor to communicate a continuum of human understanding of oceans."

The Portuguese exhibits were coordinated around the Expo’s theme of the world’s oceans and five of the six Portuguese pavilions provided a view of oceans in the past, our current understanding of oceans, and suggestions of what might occur to the world’s oceans in the future. This repetition through a series of experiences and displays did create a powerful effect. Beyond the thematic content, each of the pavilions incorporated an innovative effect or experience into its program.

The Knowledge of the Seas Pavilion incorporated kinetic experiences for the visitor to communicate a continuum of human understanding of oceans. In particular, as a visitor advanced through the first phase of displays, some of the constant instability of the ocean’s surface was illustrated at a large scale, using three large, dynamic models constructed of wood, iron, and fibres.

The Future Pavilion used more passive techniques to communicate its message of the interconnectedness of the world’s oceans. Multi-media displays were used at the beginning to pace entry into the building. The main core of the display proceeded along a walkway that traced a progression from the surface to the depths of the ocean, suggesting this progression with lighting and twists and turns in the path followed.

The Oceans Pavilion represents the culmination of a progression through the Knowledge of the Seas and the Future Pavilions. Its displays repeated the themes of these two pavilions and provided both descriptive detail and a visceral experience of the interconnectedness of the world’s oceans, the advance in human understanding of these, and at the same time, a vision of the variety of life forms in the sea. As in other Portuguese national pavilions, multi-media displays and interactive videos were presented to occupy visitors waiting to access the core of the display, the large saltwater tanks that depicted aquatic habitats from the Indian, Pacific, Atlantic, and Antarctic seas at both the surface and through the depths. 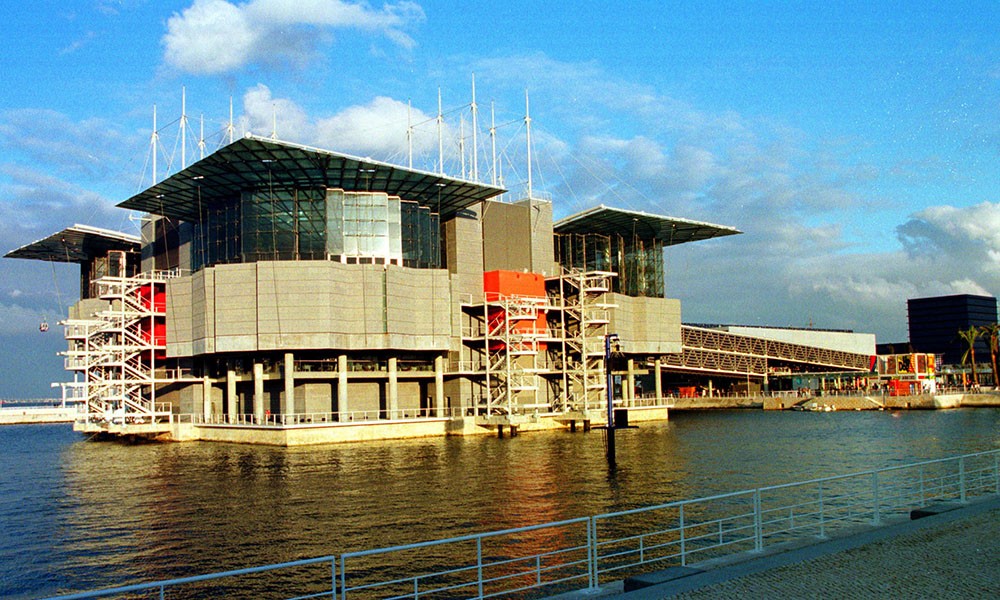 The Virtual Reality Pavilion’s undersea adventure was one of the most popular attractions of the Expo. The aim was to incorporate the most current commercial virtual reality including three-dimensional space. The sensory experience included stereo headphones, seats that moved in concert with the display, and audience input into the program. Based on its popularity and its cognitive content, Virtual Reality was an example of entertainment and education that was effective.

The Utopia Pavilion was conceptualised as the signature architecture of the Expo, the structure that might become the iconic representation of the Expo. Described in official literature as resembling a mushroom and representing an extension of traditional ship-building techniques into a superstructure, the building did constitute an important presence at the centre of the main axes of pedestrian circulation.

The European Union and the US pavilions serve as two good examples of ocean programming beyond the host pavilions. The European Union pavilion used a small portion of its space for an exhibit dedicated to the theme of sustainability. According to official documents, there was a contrast between a dirty beach and a clean beach on display. The depth of information in the display was limited. More memorable in the EU pavilion was the architecture and the adjacent landmark tower along the Tagus. Most memorable in the display was a simulated mine field. Each visitor traversed an open area where lights appeared in the floor at random intervals to create the sensation of walking across a field with hidden land mines.

In the US pavilion, the US Navy had a self-serving display promoting its own stewardship of the oceans, detailing how the Navy disposes of waste at sea and recycles materials. More intriguing to visitors were an open tank with eplesia (giant slugs), sea creatures that visitors could touch, a giant iceberg, and a film, produced by the Navy, highlighting their good environmental works. However, there was little analysis of the impact these activities had on the fleet as a whole. As a marketing campaign these brief mentions of environmental impacts certainly would impress many visitors, but the question remains how these brief encounters with sustainable practices and related issues of caring for the sea might change behaviours.

In spite of attention to oceans by many pavilion operators, the theme of Expo 1998 was not likely to be the motivation for most visitors’ attendance. A large majority (70%) of respondents to an evaluative survey of the visitor’s Expo experience reported that a visit to Expo influenced their decision to visit Portugal, and most respondents enjoyed the Expo, although no questions were asked regarding their views of pavilions, activities, and displays. In response to a related question, a small proportion (30%) of visitors reported that a visit to Expo 1998 changed their view of Portugal. This response indicates that a visit to the Expo was unlikely to create behavioural change or a lasting impression among a majority of visitors. 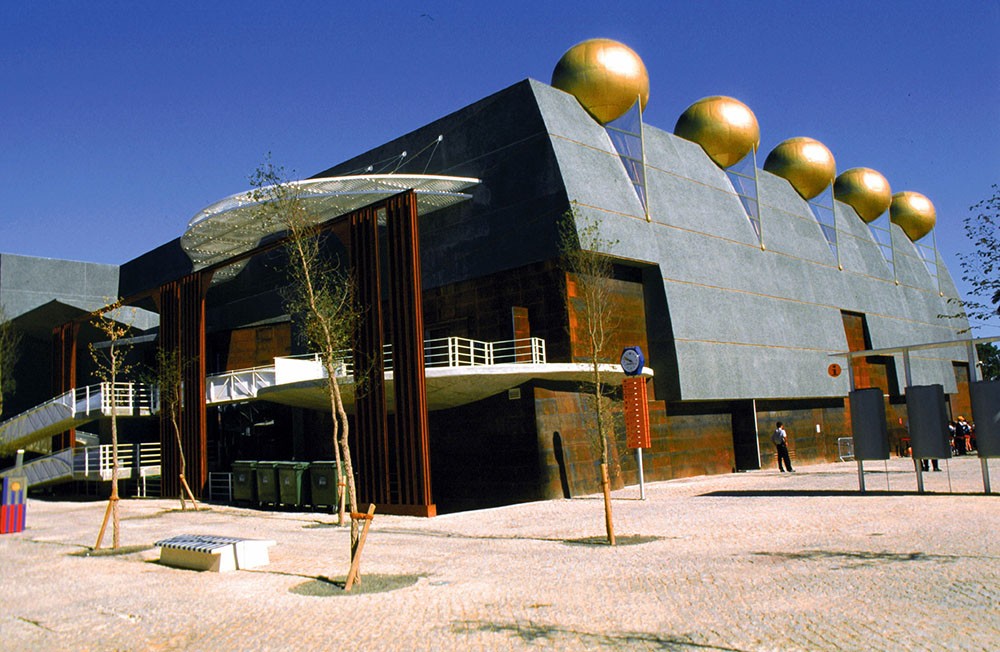 Another indicator of possible lessons learned by visitors is in the official guidebook and film. The rhetoric describing the activities of Vasco da Gama and related discoveries in the guidebook and film shown to visitors receives more attention than sustainability.

The landscape and the design elements of the site served as both entertainment exhibits and as public education. Notable features were the water volcanoes in the Water Gardens/Vitalis Park. Children and passers-by played in the water spewed by volcanoes while the mist surrounding these was refreshing. At night, the volcanoes reflected light in a dramatic way. Another interactive outdoor feature was the Nautical Exhibition featuring historic sailing ships docked along the Tagus River. Visitors could experience being on shipboard and also enjoy the cooler temperatures over the water.

Several significant landmarks provided orientation as well as entertainment. The reflecting pool alongside the Utopia Pavilion provided another place to relax as it provided a landmark between the Sun Gate entrance closest to the Intermodal Station and the river. Similarly, the Vasco de Gama Tower provided telecommunications infrastructure and also served as a landmark for the Cable Car.

The Cable Car provided a link between the Nautical Exhibition and the Vasco de Gama Tower. Its trajectory followed the Tagus River between these two points. It started just north of the exit from the Nautical Exhibition, crossed the entrance to the boat basin where the Oceans Pavilion was located, and ended by the tower. The experience of the ride was similar to cars provided at other venues.