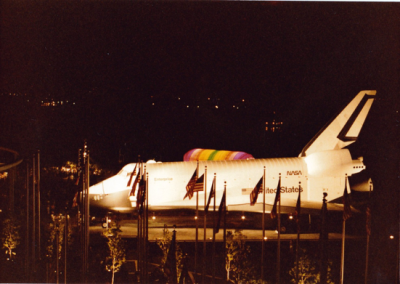 The U.S. Pavilion was located at the South End of the riverfront site. It housed two 750-seat, 3-D theaters both showing a 20-minute film by Academy Award-winning producer Charles Guggenheim entitled “Water, the Source of Life.” (The theme of the expo was “The World of Rivers – Fresh Water as a Source of Life") The exhibits were fabricated in Alexandria, Virginia and transported to New Orleans. Coordinating building construction with exhibit design and fabrication was a constant challenge. 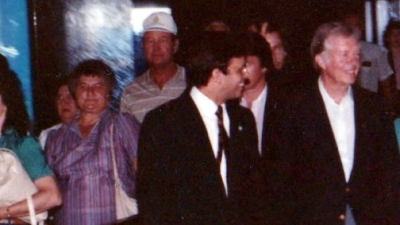 The pavilion garnered a 5-star rating by local reviewers. One of its attractions was the Space Shuttle Enterprise, (NASA’s prototype orbiter, which now has a permanent home at the Intrepid Sea, Air & Space Museum in New York City) which was displayed in front of the pavilion. It had made a New Orleans flyover attached to a Boeing 747 and was then transported by barge up the Mississippi and off-loaded to the expo site. During the expo it was used for Bob Hope’s Super Birthday Special with Bob Hope and Twiggy boarding the Shuttle as they sang, “Fly Me to the Moon” (see video below). Notable guests to the pavilion included Vice President Bush, former President Jimmy Carter, Secretary of State Shultz and Secretary of Commerce Baldridge.

The pavilion had then-unique virtual aquariums that were actually video touchscreens where visitors could touch the moving fish on the screen to discover interesting facts about them. By the end of the expo, 2.6 million people had visited the U.S. Pavilion, which was 35% of the entire attendance to the expo.