The intertwined relationship between food and energy is a fundamental question when considering future energy and future food supplies. The cultivation, processing, storage, packaging and transport of food accounts for a major share of energy consumption worldwide, of which an estimated 79% comes from fossil fuels.

Expo 2015 Milan – organised around the theme “Feeding the Planet: Energy for Life” – was an opportunity to address this challenge, which by its very nature impacts all countries and all people. The Expo was a platform for participating countries to exhibit the latest technologies regarding the production and consumption of food, and dealing with food waste. Participants thus demonstrated how feeding a growing population can be achieved in a sustainable manner, for example by economizing on land use and minimizing the energy-intensive practices of large-scale agriculture. 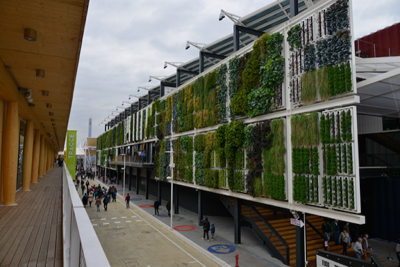 As such, a real vertical garden was showcased by the United States, whereby a large motorized wall turned to keep over 40 species of plants facing the sun, boosting efficiency, while using a water recovery system to reduce dependency on natural resources. Gabon’s pavilion took a different approach to the theme, featuring an innovative biogas system that fermented food waste and other organic biomass to generate energy for cooking and heating.

Qatar’s pavilion demonstrated projects from its own food security programme, focusing on water production from atmospheric moisture, desalination, and a hydroponic cultivation system, which involves growing plants in nutrient-enriched water. Hydroponics was a key feature at Expo 2015, with several countries demonstrating how this method can produce food in a low energy-intensive and efficient way. 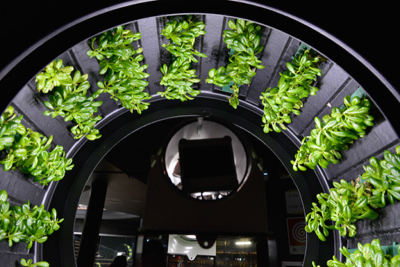 Taking hydroponics one step further, Belgium’s pavilion at Expo 2015 served as a large-scale laboratory of solutions for the future of food. It presented the concept of Aquaponics, an innovative combination of hydroponics with conventional aquaculture.

Within the Belgian pavilion, the Aquaponic Cycle System was exhibited as a concrete example of the Aquaponics concept in action. The system is based on interconnected water tanks allowing fish and plants to thrive together, with the ammonia produced by the fish transformed by bacteria into nitrates to fertilize the plants. The recycling of water, the use of natural fertilizer, and the integration of solid waste from aquaculture means that this futuristic system ranks highly as an environmentally friendly method of food production.

With the global population set to reach 9 billion by 2050, future farming methods is a key challenge for humanity. Improving efficiency and reducing the environmental and energetic demands of food production is coherent with the “Future Energy” theme of Expo 2017 Astana and its message of reducing CO2 emissions and improving energy efficiency.