Arcturus: the celestial beam that lit up an Expo Opening a World Expo is always a special moment as it marks the starting line for an event that will go onto attract millions of visitors from across the world. In 1933, Chicago wanted something electrifying to mark the opening of its “Century of Progress” Expo, a way to signal to participants and visitors how far the city had come since its establishment 100 years earlier.

While focused on technical innovation and the achievements of science and industry, Expo organisers also wanted to pay tribute to history, and notably to Expo 1893 – the World’s Columbian Exposition that was held in Chicago 40 years earlier. From these two considerations, a unique idea was born: to light up the Expo site using a beam of light that first left a star in 1893.

This is where Arcturus, one of the brightest stars in the Northern Hemisphere, plays a role. Astronomers at the time estimated that Arcturus was located 40 light years from Earth.* The light emitted from Arcturus during the World’s Columbian Exposition would reach the Earth in 1933, in time for the opening of the "Century of Progress" Expo.

Thus at 9:15pm on 27 May 1933, four telescopes located in different observatories captured light from Arcturus and focused it onto photoelectric cells. These cells then transformed the light into an electrical current that was amplified and sent to the Expo site on the shores of Lake Michigan. The current lit up the floodlights before a crowd of 30,000 people gathered outside the Hall of Science. 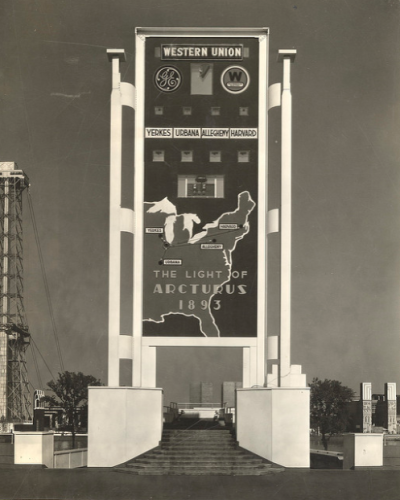 The idea is credited to Edwin Frost, the former Director of Yerkes Observatory in Wisconsin, which at the time had the world’s largest refracting telescope. Three other telescopes in different locations were also selected to ensure that at least one would detect the light from Arcturus in case of bad weather. On the opening night, however, all telescopes managed to focus on the star’s light, and visitors to the Expo could see Arcturus in the clear night sky.

With the original opening idea being widely publicised beforehand, the crowds marvelled as the lights were switched on with the help of a distant star. The photoelectric cells, which were displayed throughout the Expo, were a shining example of the technological progress of the time and of the Expo's theme "Science Finds, Industry Applies, Man Adapts."

*Astronomers have since revised their estimations, with Arcturus now believed to be 37 light years from Earth.