Serving as the main entrance to the Expo – themed “Water and Sustainable Development” and located across the Ebro River from the city centre – the Bridge Pavilion was conceived as much more than an Expo pavilion; it is also a pedestrian walkway and an integral part of the city’s relationship with the river. 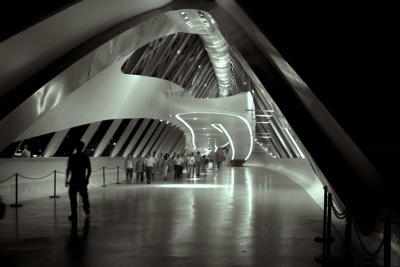 Blurring the lines between art and function, architecture and engineering, Hadid sought inspiration from nature in designing the pavilion. The result can be seen in its fluid forms – resembling the ebbs and flows of the river it crosses – as well as its gladiola blossom-shaped openings.

The 270-metre structure – Hadid’s first bridge and the first enclosed river crossing in Spain - is comprised of intersecting steel pods with a shimmering fibreglass reinforced concrete exterior. Built over two levels, during Expo 2008 the pavilion offered over 3,100m2 of exhibition space dedicated to water governability and water as a basic human right.

Years after the Expo closed, the Bridge Pavilion remains part of Zaragoza’s landscape, and a tribute to Hadid’s vision, flamboyance, and success.