A to Z of Expo Architects: Santiago Calatrava Among the creations of Santiago Calatrava, more than one have been designed for Expos. Already in 1992, the Spanish architect and structural designer created the iconic Puente del Alamillo and Kuwait's unique pavilion for World Expo 1992 Seville. A treat will also be in store at World Expo 2020 Dubai, where Calatrava has designed the host country’s 15,000m2 falcon-inspired national pavilion, currently under construction.

But the "C" selection in the Expo Architects series opts for undoubtely one of the most visited of Calatrava's creations: the grandiose Gare do Oriente railway station, opened as the main entrance hub for Specialised Expo 1998 in Lisbon.

At the core of the redevelopment of Lisbon’s eastern neighbourhood, the opening of the ultra-modernist train station created a bright and modern point of arrival for visitors to Lisbon. 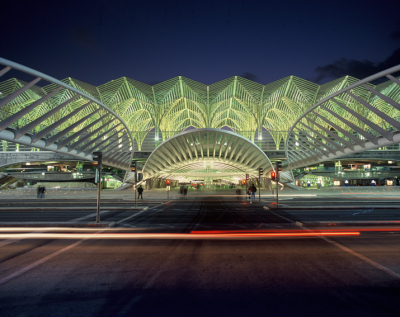 Bridging two previously separated sides of the Olivais District, the elevated station created a new pedestrianised plaza adjacent to a shopping centre, all within walking distance to the Expo site, now known as Parque das Nações. Designed to have a function long after the Expo, Gare do Oriente has become one of Portugal’s major transport hubs, and an architectural wonder in Lisbon, receiving the prestigious Brunel Award for railway station design only a few months after its opening.

Embodying Calatrava’s signature style by visually representing change and motion, the station diverts the eye from the hustle and bustle of the platforms. Its translucent glass-block gallery resembles a forest canopy, maximising daylight for and combining natural design with infrastructural utility.