One of the first in a long string of collaborations between Niemeyer and his former professor Lúcio Costa, the Brazil Pavilion was a perfect representation of Niemeyer’s style and design ethos. Primarily made of reinforced concrete and plate glass walls, the L-shaped building was all curves, a shape favoured by the architect throughout his entire career. 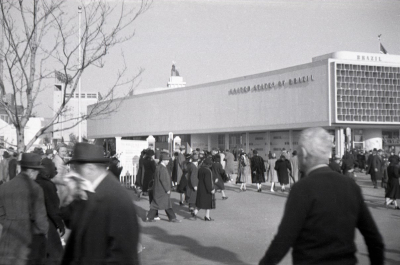 Visitors accessed the main platform through a curved ramp, where they could then admire the pavilion’s aquarium, orchid house and aviary. Thanks to brises-soleil louvers on the façade, the temperature could be regulated, while allowing in natural light. In contrast to mainstream contemporary architecture, the fluidity and “lightness” of the pavilion transmitted Brazil’s own peculiar form of “tropical modernism”.

As one of his first completed works, the Brazil Pavilion offered the world a glimpse of Niemeyer’s vision and the influence he would have on modern architecture. Widely appreciated by the public and architectural critics during the Expo, the pavilion’s modern aesthetics and reinforced concrete basis became a precursor for the ‘Brazilian style’ that dominated in later decades.