A to Z of Expo Architects: Moshe Safdie Israeli-Canadian architect, urban planner and author Moshe Safdie is in the spotlight for this week’s instalment of the A to Z of Expo Architects for designing the Habitat 67 urban residential complex for World Expo 1967 Montreal.

As an undergraduate at McGill University, Safdie first developed the idea of a reinvented apartment building, proposing a “Three Dimensional Modular Building System” in 1961. The building’s goal was to solve the problem of urban sprawl by offering a new model of affordable, high density urban housing that can afford residents the amenities, space and privacy of an individual home.

Impressed by the project, Safdie’s tutor encouraged him to submit it to Expo Organisers, who commissioned him to turn his idea into reality by developing a 12-storey complex in the Cité du Havre, just across the river from the main Expo site. The theme of the Expo – “Man and his World” – lent itself to the issue of housing, and Habitat 67 was selected as a visionary demonstration project. 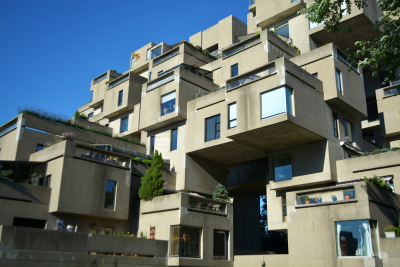 The building consists of 158 furnished residences composed of 354 interconnected concrete boxes, all of which are load-bearing. The complex was designed with 15 types of housing, each of which had its own roof-garden, and thanks to the innovative design, a maximum of natural light and the flow of fresh air.

Creating waves at Expo 1967 for its aesthetics and innovative minimalism, the emblematic complex became one of Montreal’s most recognisable icons. It thrust Safdie into the limelight, earning him the 1967 Construction Man of the Year Award as well as the Massey Medal for Architecture in Canada, and leading to a number of high-profile commissions.