A student of Kenzo Tange in the late 1950s, Kurokawa was one of the youngest founders of the Metabolist movement, which guided his architectural philosophy, seeking closer affiliation with natural processes and embracing impermanence. In creating a joint pavilion themed “Light for Man” for Japanese groups Toshiba and IHI, he magnificently put these ideas to use, creating a unique space-frame structure based on tetrahedron units. 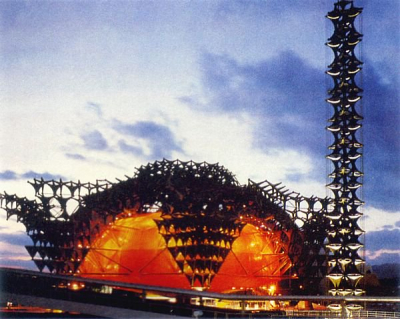 From the outside, the 3,300m2 pavilion resembled a giant living creature with its imposing steel-plate three-dimensional trusses surrounding a giant red dome. Its visual impact was augmented by a 50-metre tower – also made from steel plates – visible from its main approach, as well as open joints, giving the impression of a futuristic forest. 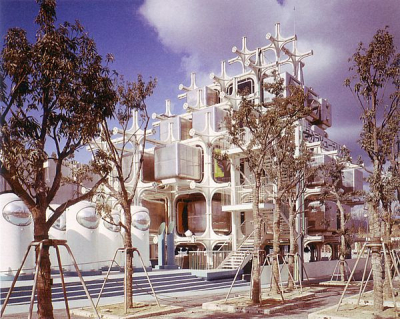 Within the dome, entered from a lower level, visitors could discover an audiovisual show within a 500-seat “Global Vision” theatre, featuring nine screens and a 26-metre revolving floor that raised and lowered the seats once per minute. The documentary showcased landscapes, cultures and young people from around the world, unified in their shared aim of building a better world for humanity.

Composed of simple constituent units in line with metabolist thinking, the pavilion was easily dismantled following the Expo, with its steel recycled for other uses.