The resulting creation is a 30-metre high wooden structure, described as “part church, part owl, part political insult and part whale”, featuring seven diagonally arranged church steeples. Largely asymmetrical in line with Makovecz’s organic mantra, one side of the pavilion is dark with slate cladding and a giant animal mask, while the other side – next to Hungary’s neighbour Austria – featured more white, symbolizing the country’s embrace of the West. 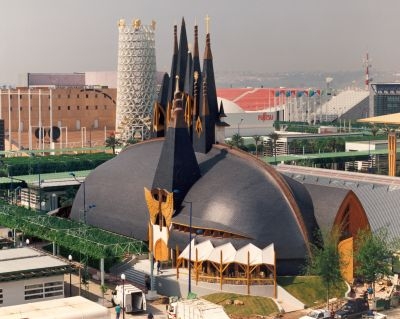 The interior of the pavilion was also divided, with a large wall symbolizing Hungary’s position between Western and Eastern Europe. One section represented the West, with a Baroque church front and a ‘Tree of Life’ – an ancient oak tree with long branches almost touching the roof and its roots visible through a glass floor. The East side featured a Slavic-style façade, and projected a film depicting the history and daily life of Hungarian people.

Considered one of the most lyrical pavilions at the Expo, it earned Makovecz the Commander’s Cross with Star of the Hungarian Republic. Twenty-seven years later, the pavilion still stands on the former Expo site, where it is listed as a protected building.