A to Z of Expo Architects: Eberhard Zeidler

The last week of this A to Z of Expo architects is dedicated to Eberhard Zeidler, who designed the Canada Pavilion for Specialised Expo 1986 Vancouver, in partnership with Barry Downs.

Already well-known as the man behind Toronto’s Eaton Centre and Ontario Place, the German-Canadian architect was charged with creating Canada’s largest-ever Expo pavilion, with 10,800m2 of exhibition and performance space. Situated on a former railway pier on the Vancouver waterfront, the pavilion’s high degree of visibility offered a unique opportunity to create a new landmark and public space for the city. 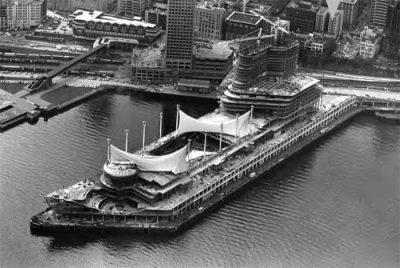 In line with the Expo’s theme “Transportation and Communication: World in Motion – World in Touch”, Zeidler designed the structure to have a decidedly nautical character. Thus, jutting 330 metres out into the bay, the expansive pavilion was conceived with a roof resembling huge white sails.

Zeidler teamed up with Horst Berger and David Giger to execute the roof project, which involved the creation of a wave typology by using ridge and valley cables with opposing curvature to hold up a fibreglass and Teflon membrane. The innovative use of a double membrane containing an air chamber improved the roof’s temperature and acoustic insulation, particularly useful as the end part of the pavilion featured an amphitheatre.

During the Expo, the modern and lively pavilion hosted a range of thematic exhibits, events and performances, drawing more than five million visitors over its six-month run. Designed to last, the complex – now known as Canada Place – remains in place, hosting among others a convention centre, a hotel and cruise terminal.