A to Z of Expo Architects: Buckminster Fuller Following on from Gustave Eiffel, the A to Z of Expo Architects moves on to another groundbreaking designer who made waves for his original and bold creations: Richard Buckminster Fuller.

Perhaps as celebrated for his unbuilt projects as for the structures that saw the light of day, one of Fuller’s most iconic creations is World Expo 1967 Montreal’s United States’ pavilion, the largest geodesic dome at the time of more than half a sphere, today known as the Biosphere.

In the 1950s and 1960s, the idea of the geodesic dome – a spherical structure with a surface made up of a network of triangular elements – was seen by some futurists as a practical and environmentally-conscious response to accommodating a growing population. This is due to the physical properties of the dome, which offers significantly more sheltered space using fewer materials than traditional construction methods.

Fuller, a self-described ‘anticipatory design scientist’, was already widely recognised for his pioneering work on geodesic domes and forward-thinking ideas, having even created earlier versions at the 10th and 11th editions of the Triennale di Milano, in 1954 and 1957.

When commissioned by the United States for its Expo 1967 pavilion, Fuller created the most significant and eye-catching geodesic dome yet, with a diameter of 76 metres and a height of 61 metres. The double-layer dome was made with 24,000 steel bars and curved acrylic panels which were integrated into a computer-controlled system to block out solar radiation. The ‘skin’ of the structure was entirely independent from the indoor buildings, which featured seven levels of exhibits on the theme of “Creative America”. Visitors to the pavilion thus entered an entirely separate world, whether through the Expo’s minirail – which ran right through the structure – or on foot through a series of internal escalators.

The dome rapidly became a symbol of Expo 1967 and one of Fuller’s most enigmatic and talked-about buildings. Gifted to the city of Montreal following the Expo, the structure was damaged in a fire in 1976, which destroyed its outer acrylic layer. Its steel structure and inner buildings nevertheless survived the blaze, remaining an icon of Parc Jean Drapeau and later being renovated, now hosting the environmentally-focused Biosphere museum. 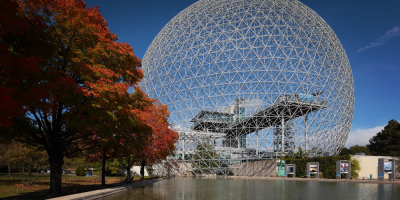 The 1967 US pavilion marked the pinnacle of Fuller’s focus on geodesics, but he continued to work on innovative approaches to architecture, and to combat for scientific and environmental solutions to global problems. His influence and association with the geodesic dome were so important that an allotrope of carbon discovered in the 1980s – fullerene – was named after him due to its resemblance to his constructions.