The theme of the Expo being “A World View: A New Humanism”, Waterkeyn was commissioned to display the audacity of Belgian industry by designing a monumental structure expressing an optimistic vision of the future. Seeking to portray the pacific and prosperous use of nuclear power after the Euratom agreement, Waterkeyn was inspired by the idea that the infinitely small can also be infinitely powerful. The idea for the Atomium was thus born, representing an iron crystal cell, magnified 165 billion times. 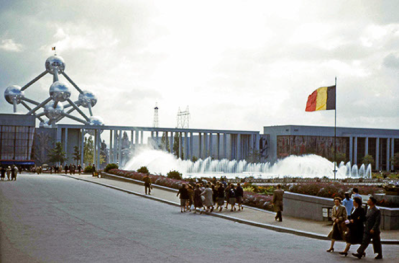 The geometric structure, rising as high as 102 metres, took two years to build. Composed of 20 tubes connecting nine reflective aluminium spheres – later replaced by stainless steel – the structure weighs 2,400 tonnes. Windows were installed in the top and bottom spheres, with the others only featuring elliptical skylights to avoid slowing the movement of visitors. 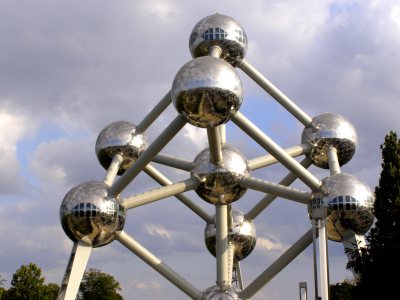 Visitors to the Expo were enchanted by the impressive monument and could take a lift – the fastest in Europe at the time – to access the Atomium’s exhibitions, restaurant, and panoramic views. Initially designed as a temporary structure, the popularity of the structure prevented it from being taken down, with a massive restoration project in the 2000s bringing it into the 21st century.

Considered a key part of the history of Belgian architecture, Waterkeyn’s creation is today one of Brussels’ best-known landmarks, the venue of numerous exhibitions and events, and an “icon of Belgitude.”