The resulting pavilion was based around a traditional Italian hill town with little houses built closely together. It thus differed significantly from the formalistic structuralism that predominated the architecture of the Expo. Surrounded by red and green beeches, the ‘village’ had a romantic aspect to it, enhanced by meticulous glass structures on the houses, depicting typical Italian life with its problems and its values. 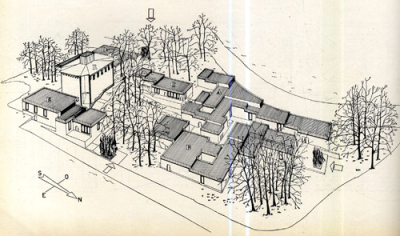 Fearing it was too reactionary, the Italian Government publicly distanced itself from the pavilion. Reactions were mixed, however, with visitors finding it charming and romantic, while architectural critics were divided between those who were affronted by its rejection of modernism and those who appreciated its distinctiveness compared to most other pavilions.

Both before and after his contribution to the Italian pavilion, Quaroni led a number of urban redevelopment projects, which were shaped by and had an influence on the ongoing architectural debate in Italy. As illustrated by his role in the Expo 1958, Quaroni was an ardent critic of mainstream thinking throughout his career, as an architect, as an urban planner, and later as a university professor.