In popular culture, the Fair’s iconic saucer-topped tower, the Space Needle, became known around the world. Elvis Presley filmed a movie there that Expo summer and it became the model of futuristic living when towers like it appeared in the popular cartoon TV series “The Jetsons” which promised we would also live in Needle-like “sky pads” and commute by flying cars. 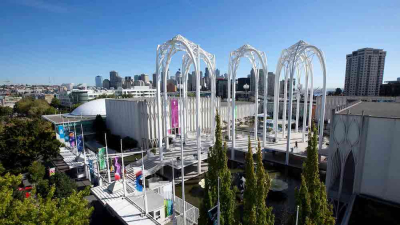 While the fair looked to the skies, its organisers also had their feet firmly on the ground in terms of the Expo’s legacy. Seattle was inspired by the 1909 Alaska-Yukon-Pacific Exposition to create a civic centre and put that idea into a citywide master plan. It remained unexecuted until the mid-1950s when voters passed a measure to fund one. A cadre of civic leaders took that bond money and decided to leverage it into the first U.S. Expo since 1939-40. The result was what fair president Joseph Gandy, a car dealer, described as a “convertible fair.” He meant that after the Expo, it would convert to a permanent cultural centre at a location near downtown, connected by monorail. The Expo site was redubbed Seattle Center and many fair structures were kept: the Space Needle, the U.S. Science Pavilion (converted to a science education centre), the Washington State Pavilion, converted to a sports and event venue now called Key Arena, and the Monorail among them.

In the last 50 years, the Center has flourished as a gathering place and cultural locus, inhabited by arts groups and non-profits. But its location in the city, yet at a distance of a mile or more from the downtown core set it apart. Now, however, the rapid development of the city has swung the centre of gravity toward Seattle Center. Nearby land hosts Amazon’s headquarters. Microsoft co-founders Bill Gates and Paul Allen, both of whom attended the ’62 fair, have situated their organisations close by. The Bill and Melinda Gates Foundation and Allen’s real estate company, Vulcan, are there. South Lake Union is a hive of tech and biotech research. As the urban core has expanded, Seattle Center is finding itself at the centre of action. 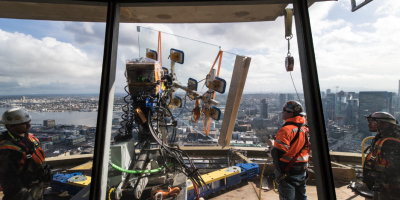 Private funds are also pouring into the Center. The Needle is undergoing a $100 million renovation with the first phase—a revamped observation deck—scheduled to be unveiled this summer. A rotating glass floor is also being installed in the restaurant. Some $600 million in private money is being put into a renovation of Key Arena for concerts and professional hockey and basketball. An old stadium on the site, used during the Expo for water-skiing demonstrations, may also be redeveloped as an urban school.

Those Seattleites of an age to have visited the Expo remember many of its fun features: a spherical glass elevator called the Bubbleator (now echoed in Amazon’s nearby Spheres), piles of Belgian Waffles covered in whipped cream and strawberries, and first encounters with technologies we take for granted today, like computers and video phones. So too they remember the excitement and legacy an Expo can bring to a city. Expo 1962 is often a touchstone for those who want to recapture the spirit of positive change and urban evolution that the fair enabled. 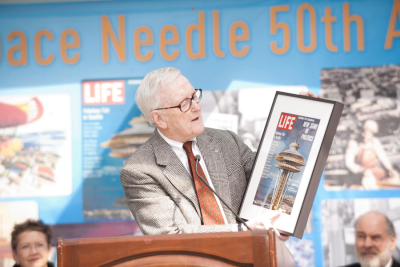 This anniversary will be bittersweet. On 21 April, at the foot of the Needle in the Chihuly Garden and Glass museum, the memorial service of Jay Rockey, last member of the senior Expo staff, who passed away earlier this year, will be held. He died at age 90. Rockey is credited with his successful efforts to sell advance tickets and put the Expo on the map by wooing the world’s media. After the Expo he stayed in Seattle and ran a very successful public relations firm. Former Expo staffers and attendees will be there to remember Rockey and what he helped bring about, an Expo that resulted in nothing less than the transformation of a city that continues to this day.