20 years later: Gare do Oriente, more than just a station 20 years ago today, as the Portuguese capital was preparing to open Expo 1998, Gare do Oriente was inaugurated. At the core of the redevelopment of Lisbon’s eastern neighbourhood, the opening of the ultra-modernist train station on 19 May 1998 was a milestone for Portuguese architecture and one of the final steps in the preparation of Expo 1998, which welcomed its first visitors only three days later.

For the millions of visitors coming to Lisbon for the first time to visit the Expo, the new station, designed by celebrated Spanish architect Santiago Calatrava, was a bright and modern point of arrival.

Diverting the eye from the hustle and bustle of the platforms, the grandiose glass and metal structure combines both Modernist and Gothic styles. Maximising daylight for passengers, its gallery resembles a forest canopy, demonstrating a marriage of natural design and infrastructural utility. 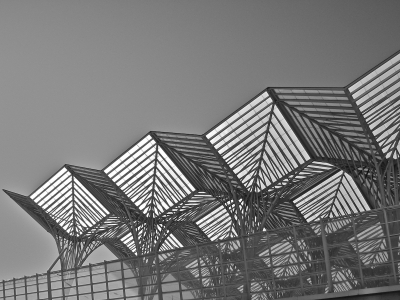 With its airy and bright spaces, the station also symbolised Lisbon’s modernity on the eve of the 21st century, as the city geared up to welcome 10 million visitors to Expo 1998. As a key part of the widescale renovation of Lisbon’s eastern riverfront that accompanied the Expo project, Gare do Oriente bridged two sides of the Olivais District. The elevated station created a new pedestrianised plaza adjacent to a shopping centre, and within walking distance of the Expo site, now known as Parque das Nações. 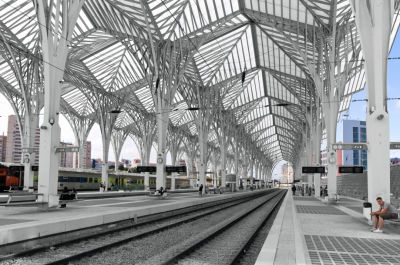 As well as being the gateway to the Expo, Gare do Oriente has become one of the main transport hubs in Portugal and a modern architectural wonder in Lisbon. Built with a budget of around €130 million, it is an interchange for national and regional trains, with an adjoining bus station as well as a connection to Lisbon’s metro network.

While Gare do Oriente is only one of several impressive structures built ahead of Expo 1998, it remains one of the most beautiful – and frequented – legacies of the last Expo of the 20th century. Only a few months after its opening, international recognition for the structure was confirmed when it received the prestigious Brunel Award for railway station design.