One particular exhibitor at Vienna, however, made a discovery that went on to change the dynamic of electricity production. Belgian inventor Zénobe Gramme presented a dynamo he had developed two years earlier, which used ring armatures wound around an iron ring and magnets, producing an almost-consistent voltage. In itself, Gramme’s dynamo was a useful innovation as unlike previous electrical systems, it’s production was constant and powerful enough to operate machinery. 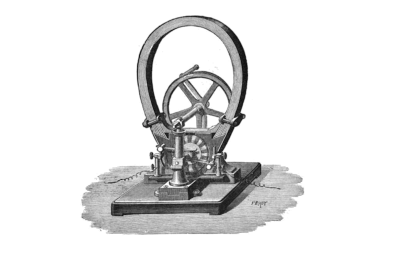 The true potential of Gramme’s innovation, however, was only discovered when his business partner Hippolyte Fontaine unwittingly used a copper cable to connect Gramme’s machine to another dynamo located 500 metres away. Unexpectedly, the shaft of the second dynamo began to spin, which in turn was used to power a water pump. This discovery demonstrated the practical application of the convertibility of electrical current, by turning Gramme’s dynamo into the first electric motor with enough power to be used in an industrial setting.

The innovation was significant because it opened the way for electricity to be used as source of mechanical power, and because it allowed energy to be used at a different location from where it was generated. The industrial opportunities of applying the Gramme principle were widespread, opening the way for the electrical industry to expand and compete with steam engines. Gramme’s discovery became the basis for all direct current electric motors, and in subsequent years permitted Thomas Edison and Nikola Tesla to make the inventions they did.