On 18 July, Expo 2025 Osaka Kansai marks the 1,000-day countdown to the opening of the next World Expo. As part of the development of its theme “Designing Future Society for Our Lives”, Expo 2025 Osaka Kansai has entrusted eight thematic projects to experts in their domain with a focus on working towards a better future for humankind. In the first of a two-part series, four of these producers discuss their philosophy and the Signature Pavilions they are creating for the Expo. Discover the future society visions of Shin-Ichi Fukuoka (Quest of Life pavilion), Naomi Kawase (Embracing Lives pavilion), Hiroshi Ishiguro (Amplification of Lives pavilion), and Yoichi Ochiai (Forging Lives pavilion).

A professor at Aoyama Gakuin University, Shin-Ichi Fukuoka is a molecular biologist who has studied the mechanisms of life as reductionism and “life as a machine”. His belief that he “could not completely capture the wholeness and dynamism of life” made him reconsider life as a dynamic equilibrium, a philosophy that has shaped his approach towards the Quest of Life project at Expo 2025 Osaka Kansai, of which he is the producer.

How does your perspective towards Quest of Life interact with the overall theme of Expo 2025 Osaka Kansai?

Shin-Ichi Fukuoka: Life appears to behave selfishly and yet it is always altruistic. An altruistic network underpins global circulation, the environment and sustainability. It is this way of thinking that forms the basis of the philosophy of the Sustainable Development Goals (SDGs), and it is a core part of the vision of Expo 2025 Osaka Kansai. 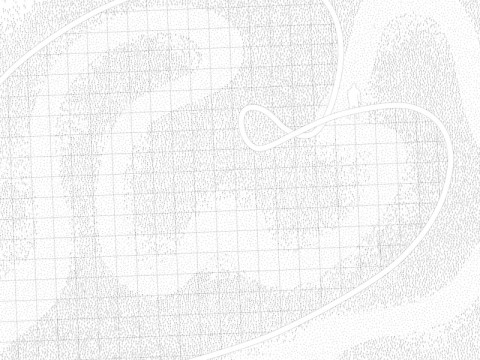 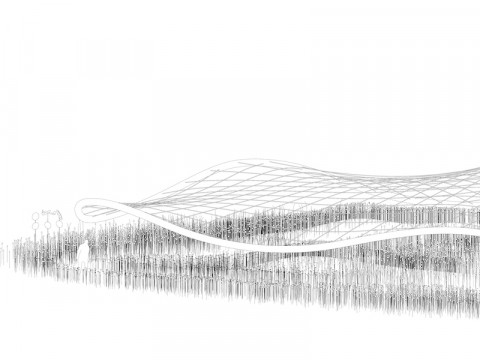 A sketch of the exterior of the Quest for Live pavilion

In what ways will the Quest of Life pavilion shape visitors’ impressions on the life cycle?

Shin-Ichi Fukuoka: Visitors to the Quest of Life pavilion will encounter an organism model called a "reactive organism". These will respond to visitors' occasional movements, and the responses will form a network with other reactive organisms. Through this experience, visitors will be made aware that they are dynamic members of a greater life system.

We aim to make visitors aware that an organism is not a vehicle of a selfish gene, but a member of an altruistic symbiosis that constantly receives and simultaneously delivers substances, energy, and information from its surroundings.

Through her award-winning films, Naomi Kawase has always captured the relationship between things seen and unseen, particularly focusing on the socially marginalised. Her ancestral origins in Amami Ōshima (Okinawa) and her upbringing in the forested mountains of Nara have given her a “duality” that shapes her message for the Expo, where she is the producer of the Embracing Lives pavilion. The aim of the project, explains the UNESCO Goodwill Ambassador, is to encourage dialogue “to envision together a greater humanity – not as we are, but as we can be”.

What is the importance of dialogue in achieving the Expo theme “Designing Future Society for Our Lives”?

Naomi Kawase: Dialogue is fundamental to healing the 'divisions' that abound this world. Before society, there lies the individual. Forgiveness is born when we realise the you in me and the me in you; when we open ourselves to one another, to have an abundance of heart. Therein lies the importance of dialogue. To listen, to imagine, to believe together in a future that lies beyond. It is to recognise that we are not alone and that we must continue to look at one another, to speak with one another. 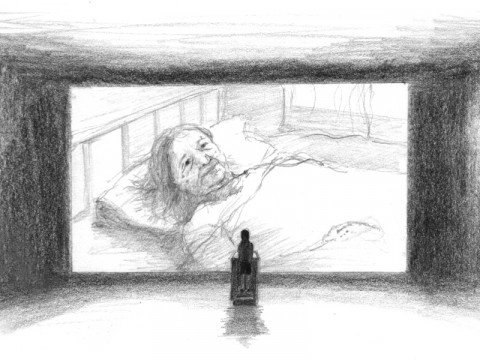 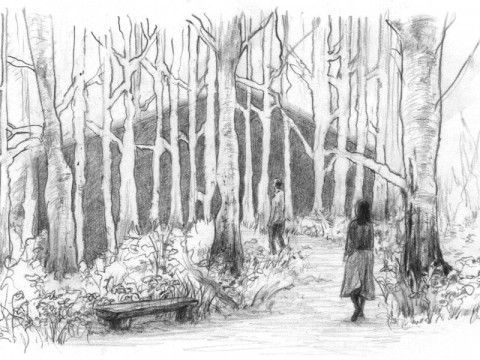 A sketch of the exterior of the Embracing Lives pavilion

How is the Embracing Lives pavilion being conceived to foster encounters between individuals?

Naomi Kawase: My films are characterised by the ways fiction and reality blend into one another. The Dialogue Theatre in the Embracing Lives pavilion will seek to realise this at the Expo. Is it real or is it fiction, and how will it end? A future whose unfolding story is left unknown - to the audience, the staff, to even the performers themselves.

It will be an encounter with an unpredictable reality, as it is with life. A reality that appears and disappears before us. Only to fade into eternal memory.

Robotics engineer Hiroshi Ishiguro is Honorary Professor at Osaka University and Visiting Director of ATR Hiroshi Ishiguro Laboratories, specialised in robot development. At Expo 2025 Osaka Kansai, where he is producer of the Amplification of Lives project, he aims to contribute to a future society with diverse values and a sense of well-being by developing new technologies and notably avatars.

How will future society be able to expand the possibilities of life using technology?

Hiroshi Ishiguro: Humans have expanded their abilities through the use of technology. This is our significant difference from other animals. We still do not know what humans are; we are alive to explore the full potential of humankind. It is nevertheless clear that, unlike other animals, humans are evolving with and as a result of technology. In the future, humans will continue to evolve with technology. 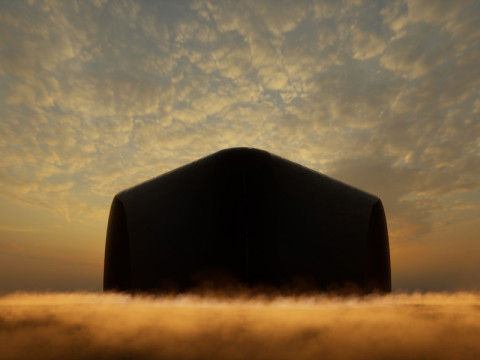 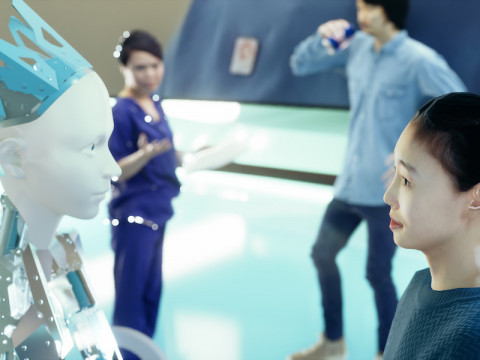 In what ways will the Amplification of Lives pavilion explore the boundaries between people, robots and avatars?

Hiroshi Ishiguro: In the Amplification of Lives pavilion, we will depict a scene 50 years from now in real and virtual venues. It will feature humans who fuse with more advanced technologies, coexisting with robots who have become more human-like. Visitors to the pavilion will be able to see, experience, feel and think about how humans and technologies will merge and evolve in the future.

Media artist and computer scientist Yoichi Ochiai is passionate about the exploration of Digital Nature – the harmonisation of the material and non-material worlds. Carrying out research on the technological perspectives of a new nature and exploring creative practices in the digital age, he sees Expo 2025 Osaka Kansai as an opportunity to forge an artistic approach to transcend the current technological and social environment. This will be at the centre of the Forging Lives project he is producing at the Expo.

Can you describe the concept of ‘digital nature’ and its role in the Forging Lives project?

Yoichi Ochiai: The idea that "a highly sophisticated technological environment will eventually dissolve and absorb itself into original nature" has been presented both in literature and in technological theory by many in the past and the present. My vision of Digital Nature goes beyond new nature; it is a new ecosystem in which matter and non-matter are in harmony, and where the boundaries of time and space can be expanded. It is difficult to select words to describe this unexplored state of nature from the words in use today, but there are words that can be used to support it, such as “Transformation” by Zhuangzi in Eastern philosophy and “voidness”（空）and “dependent origination”（縁起）in Buddhist thought, when looking at historical examples.

By linking this to the computer term ‘null’ meaning voidness, and by redefining the expression "Form is precisely emptiness and emptiness is precisely form” (空即是色色即是空) as "null2", we aim to harmonise the dynamically generated digital with physicality. By presenting art created by Forging Lives, we envision a future filled with harmony, fusion, and more diverse possibilities.

"By visiting the Forging Lives pavilion, visitors will blend into the landscape as part of an unexplored spatial art form" 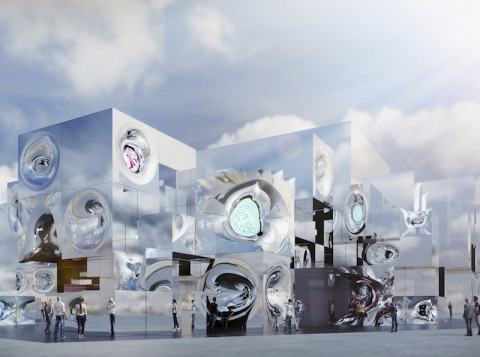 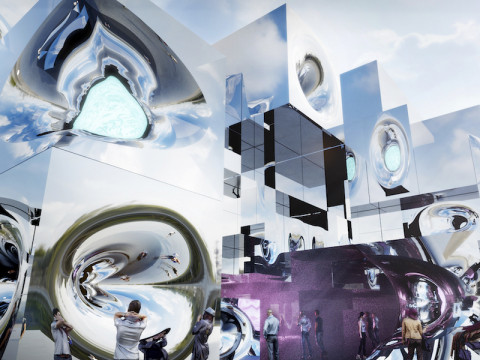 What will the “null2” experience entail for visitors? What will its lasting message be to visitors?

Yoichi Ochiai: The pavilion will present visitors with two types of mirrors, one digital and the other analogue, to represent polished life being forged. Mirrors, which are common in our daily lives, are materials that are colourless in visible light, yet have textures that seem to be connected to the outside world through their surfaces. We believe that this is the ideal material for expressing “null2”, as depicted by the voidness and its origins. The pavilion will have a mirrored form, serving as a transforming sculpture, where the experience inside renders an interaction with the visitor’s own digital alter ego, a digitally-scanned reflection. Through this digitised presence, the visitor will experience traditional landscapes, reincarnation, and a story of life and death that unfolds as a dialogue with themselves.

By visiting the Forging Lives pavilion, visitors will blend into the landscape as part of an unexplored spatial art form, never before seen by humankind. By interacting with digital humans inside the pavilion, visitors will gain not only a logical understanding of life and death, data and physicality, and extended humanity, but also a physical and intuitive understanding. It is an experience of interacting with a body that encompasses death, which will be an important concept in the future history of humanity, and one that is synonymous with becoming part of the work and history of oneself.