Sixty years after Expo 1958, why is the event still celebrated?

Henri Simons: 1958 was an important year in Belgium’s history, a time when the country was powerful and unified, a midway point between two eras. Expo 1958 is associated with an exceptional period of national pride which now forms part of the country’s collective memory. 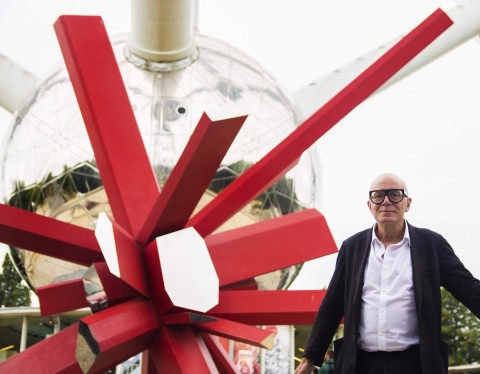 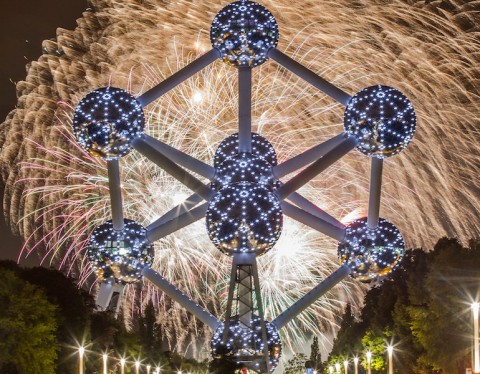 In 1958, the Congo was not yet independent, and the language laws that created the regions and that shaped Belgium’s current linguistic borders had not yet been voted. It was a period that today we call la Belgique de papa.

It was also a time when Europe was coming together, with the signature of the Treaty of Rome a few months earlier, followed by the establishment in Brussels of the European Economic Community and EURATOM. In 1958, Belgians were living in la Belgique joyeuse, and the World Expo was an expression of the country’s know-how, creativity and audacity, all of which were exemplified in the Atomium.

"By organising Expo 1958, Belgium became the focal point of the world"

When Belgium hosted the Expo, its economy was ranked around the 10th largest in the world. It possessed significant deposits of coal and iron, notably in Wallonia and in the Flemish province of Limburg, at a time when steel was still a symbol of power. With the Congo, Belgium also had access to gold, uranium, precious metals and diamonds.

By organising the Expo, Belgium became the focal point of the world. With the theme “A World View: A New Humanism”, Belgium sought to offer a ‘Better Humanity’ for all citizens, in the context of Cold War tensions. Even on the site of the Expo, this confrontation was palpable, with the US and Soviet pavilions facing each other down. 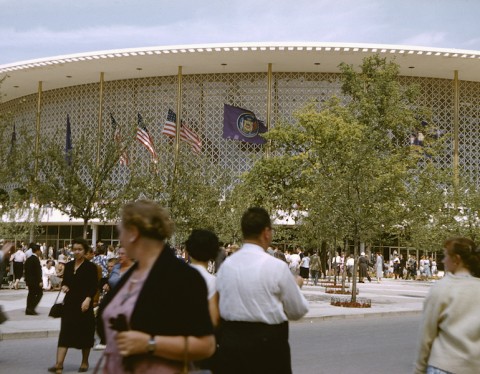 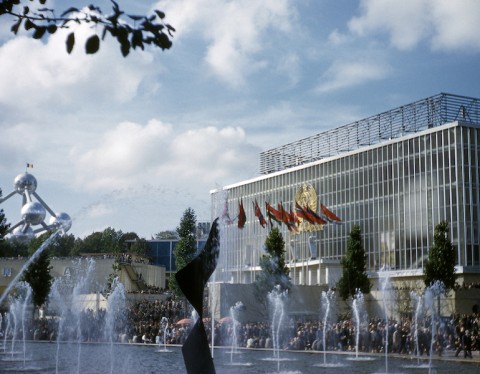 Sixty years later, it seems all the more necessary for us to explain the Expo’s ‘Better Humanity’ slogan, to pay tribute to the achievements of the era, and to recall and celebrate this event which is a defining element of a certain Belgitude. This journey into the past allows us to take another look at these achievements, including its modernist architecture, which I appreciate greatly.

Today, I have the impression that Belgium is losing its sense of unity and national pride. Many Belgians feel a degree of nostalgia for la Belgique de papa, which now seems to be lost. In this sense, marking the anniversary of Expo 1958 can be seen as a way of highlighting our heritage and unity, and looking towards a better future.

The principal theme of the Expo was “A World View: A New Humanism”. How was this theme innovative in 1958 and is it still relevant today?

Henri Simons: The hope for a better world, born of the victory of knowledge over obscurantism, had faded away as a result of science being used in the most atrocious war in history. Expo 1958 was tasked with dressing “A World View” in which human beings and humanity would take centre stage. The Expo wished to established Progress – notably in science and technology – as an element of development and solution to the ills of the world. The Expo embodied this optimistic vision of a new, modern and hyper-technological world, which would improve the lives of all.

Sixty years later, it is interesting to see what has become of the archetypes of Progress that were heralded in 1958. Nuclear technology, for example, was extolled at the Expo, with the motto “Atom = Hope” and the display of a scale model of BR-3, Belgium’s first atomic energy reactor located in Mol. Visitors were shown a radioactive iodine production unit and taught about the different applications of radioactive isotopes in industry, medicine, biology and agriculture. 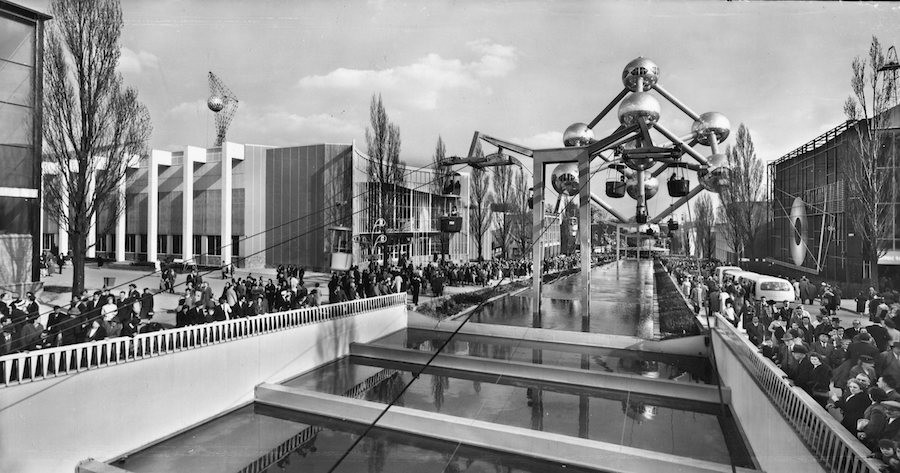 Today, we are now much more aware of the harmful effects and associated risks of nuclear technology, and we still do not know what to do with nuclear waste. The linearity of Progress and human history can clearly be called into question. The task now is to put this modernity into perspective and to advocate a new type of Progress. A Progress that we can choose.

This questioning of Progress is a recurring theme within the Atomium, and in the exhibitions organised at the ADAM – Brussels Design Museum. For instance, the Plasticarium and the Plasticotek let visitors of all ages learn about plastic. What was once a mass product with multiple uses, is today a material that we know to be damaging in terms of its production, use, recycling and decomposition. Here too, these exhibitions raise questions over this proclaimed modernity and avant-gardisme.

We can also ask the same question in aesthetics, in design, and in art more generally.

In the framework of the 60th anniversary celebrations, ADAM looks back at Expo 1958’s graphic universe with Graphic 58. The exhibition showcases the key elements of the Expo’s graphics, its forms, colours and textures, as well as its impact on design at the time, with the birth of the “Expo” style.

The Atomium is also hosting the “Atomium Meets Surrealism” exhibition, dedicated to Belgian surrealist painter René Magritte. Here too, the aim is to focus on the idea of modernity and Progress. Using innovative scenography, some of his key works are displayed within the Atomium in a playful and unexpected way. Each painting is transformed into an exhibition set, split into sections for close examination, allowing each visitors to enter Magritte’s world and discover the secret messages hidden within his masterpieces.

This view of Progress and the focus on the idea of modernity are at the heart of exhibitions, which have been programmed to commemorate the 60th anniversary of Expo 1958. These exhibitions are mirrors that reflect the past as well as the future, confronting yesterday’s utopias with tomorrow’s dreams. They continue the debate initiated in 1958: what kind of future do we want for tomorrow? 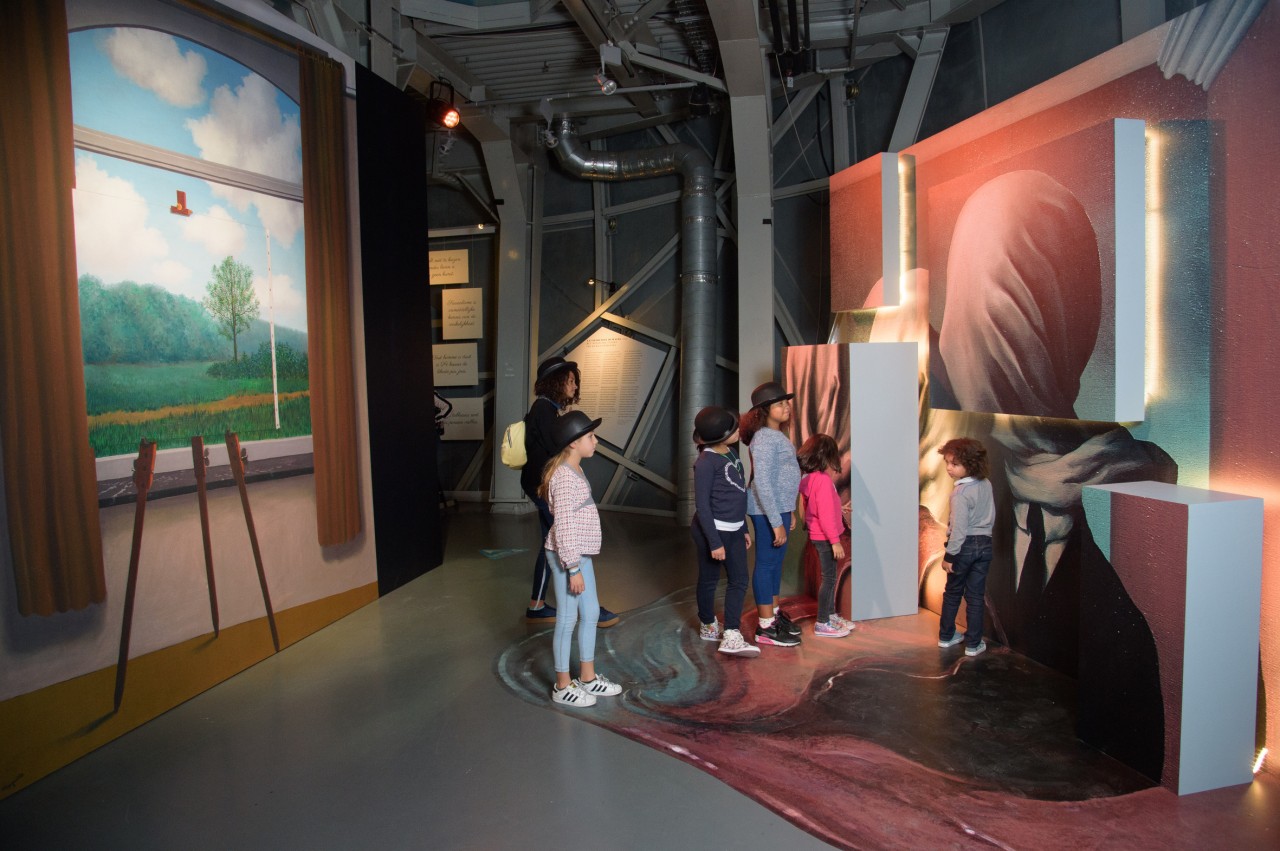 How does the programme for the 60th anniversary reflect this view of Progress?

Henri Simons: Three exhibitions have been curated under the overall title Galaxy 58, in addition to a varied events programme running throughout the year. With People of 58, an extension of the Atomium’s permanent exhibition, visitors can discover the people who made the Expo through an array of images, videos, documents, objects and costumes, many of which are on display for the first time. Meanwhile, the fashion trends of the era are the focus of Podium 58, being held in ADAM in partnership with the Musée Mode et Dentelle. The exhibition showcases the outfits and styles of visitors to Expo 1958, underlining the evolution towards a less constrained era. Finally, Graphic 58 focuses on the forms, the colours and the innovative textures that were created at the time, leading to the ‘Expo Style’. 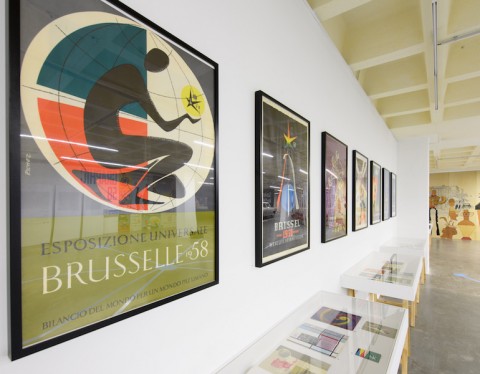 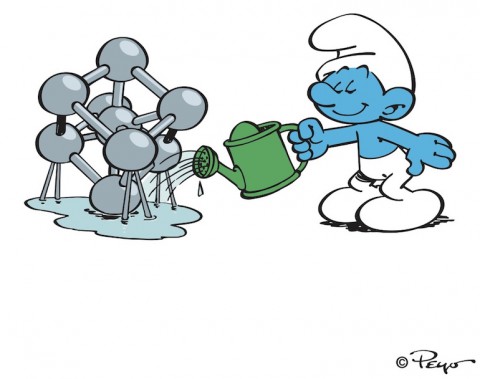 In addition to these three exhibitions, a wide range of events and activities are taking place: a rock festival, fireworks displays in summer, a grand bric-a-brac fair, and not least a special programme for the Smurfs, the Belgian comic book heroes created by Peyo, who are also celebrating their 60th anniversary this year. Other celebratory activities include the launch of Sourire 58, a new comic book by Baudouin Deville et Patrick Weber, a limited edition anniversary beer, and a special event for couples from across Belgium who are celebrating their diamond wedding anniversary this year.

The Atomium is a venue that is open to everyone and for everyone. An inclusive pricing policy has been put in place to make it even more accessible, with residents of all of Belgium’s provinces having the opportunity to (re)visit the Atomium at a special “anniversary” price.

This commemoration must be open to everyone and to all generations, creating a strong sense of belonging, letting people (re)discover our national heritage and stimulating Belgitude among Belgians and those from further afield.

It’s important that the Atomium can offer something for everyone. This is particularly the case for younger generations, as the Atomium is not an object of nostalgia but a resolutely modern venue. At the Atomium, children can spend the night in the Franquin sphere, named after the creator of Marsupilami and Gaston, young people can party, and the not-so-young can feel a part of their youth.

Has the Atomium, a symbol of Expo 1958 and its theme, become an icon of Belgium?

Henri Simons: Initially, the Atomium was only due to remain in place for the six-month duration of the World Expo. André Waterkeyn, who designed the structure, wanted to represent the idea that the infinitely small could be infinitely powerful; that everything is composed of atoms and that within each atom, there is an incredible amount of power. 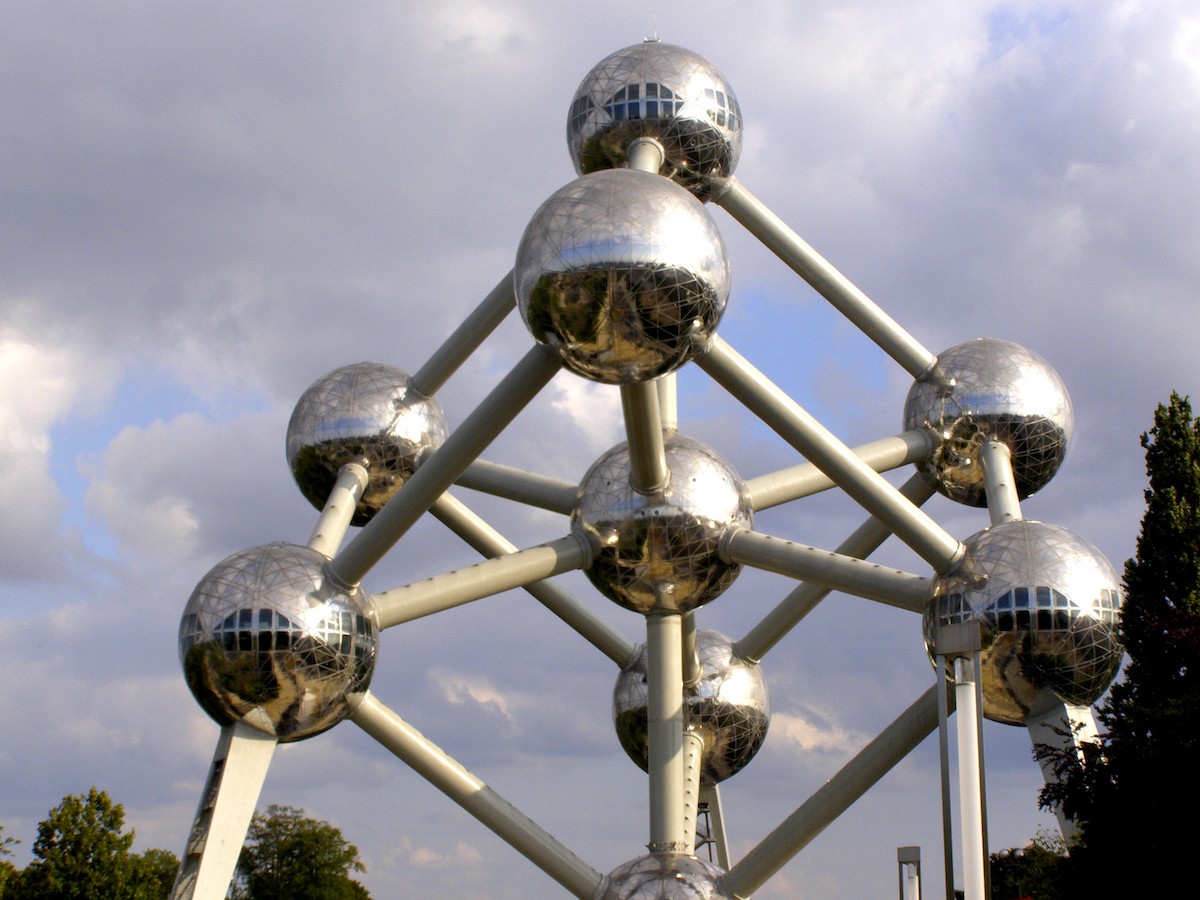 This idea reflected the understanding of Progress at the time, when science was seen as an answer to the world’s problems. The Atomium was thus a symbol of the Expo; a monumental beacon linking the destiny of humanity together with scientific discovery, and proudly asserting the benefits of technological and scientific progress.

Standing 102 metres high, and with nine spheres interconnected by 20 tubes, the Atomium was designed to represent an elementary iron crystal enlarged 165 billion times. Its construction was an achievement that paid tribute to Belgium’s industrial capacities as well as to its creativity, its originality and its modernity.

"It is the most Belgian of monuments"

Once the Expo was over, the continued popularity and success of the Atomium ensured that it became a key part of the Brussels cityscape, and an internationally-recognised symbol.

It is only after we organised its funding and its renewal, and after its renovation, that the Atomium became the symbol of Brussels and of Belgium. Beforehand, the Manneken Pis was the more recognised symbol. But after the renovation, the Belgian Minister of Foreign Affairs used the Atomium as a representation of Belgium while abroad, and Manuel Barroso placed a model of the Atomium on the lectern during a European summit in Brussels. In the past 15 years, the Atomium has established itself as a symbol of Brussels, but also as a symbol of Belgium, for foreigners as well as for many Belgians themselves. It is a unifying element as it gives each of our communities a shared sense of belonging. It is the most Belgian of monuments.