The Apotheosis of Electricity at Expo 1900 Paris Expo 1900 Paris featured awe-inspiring pavilions that showcased the ingenuity of participating countries, but one exhibit that stood out was the stunning Palais de l’Electricité (the Palace of Electricity), which was as remarkable for its beauty as its essential function on the Expo site.

Designed by Eugène Hénard, this architectural marvel was a 130-metre-long and 70-metre-high façade, covered with thin stained glass and an intricately designed ceramic decoration; crowned at the top by a chariot drawn by hippogriffs spewing showers of multi-coloured flames.

The Palace of Electricity was a major highlight of the Expo with its 5,000 multi-coloured incandescent lights that illuminated the night and Edmond Paulin’s ornately decorated water fountain, the Chateau d’Eau, situated directly in front of it.

But the most fascinating part was what lay behind the glorious façade: a massive 40-metre wide power station that provided energy and light to all the Expo’s pavilions. The Palace of Electricity was more than an attractive exhibit, it served as the beating heart of the Expo, epitomising modernity and celebrating the developments made possible by electrical engineering. 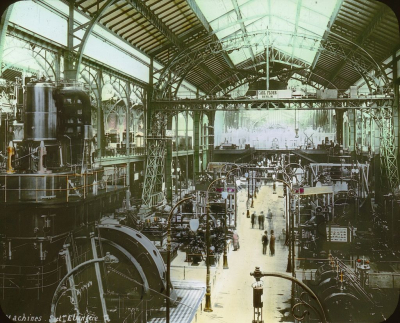 The power station contained an army of boilers, to which a special train supplied coal beneath the boiler room, and transformed 200,000 litres of water into steam every hour. This steam ran in pipes beneath the palace, and drove powerful dynamos to produce 40,000 horsepower or 100,000 volts of electricity. This monumental increase from 350 horsepower used at Expo 1855 and the 6,500 horsepower used at Expo 1889 shows the remarkable evolution of electricity usage over a 45 year period.

The Palace of Electricity was a symbol of great progress and modernity, as it incarnated the move towards the widespread domestication and commercialisation of electricity. As a spectacle, it embodied the magic of electricity, serving as an allegory to the optimism and excitement of the time.