Among Montreal’s many celebrations this year, the 50th anniversary of Expo 1967 is undoubtedly the one that brings on the strongest feelings of nostalgia among its residents. In the same year as it marks the 375th anniversary of the city’s founding and 150 years of Canadian Confederation, the city of Montreal is organising a range of activities to remember the glorious six months of 1967 when the city welcomed the world under the theme “Man and his World.”

On 4 March, Montrealers will be able to rediscover the excitement and wonder of Expo 1967 when the city holds its annual Nuit Blanche late night cultural event.

As the final night of the “Montréal en lumière” festival, Nuit Blanche will feature dozens of events harking back to the Expo, a transformative event for the city which created a prominent cultural, societal and urban legacy. The different activities offered on the night of 4 March will allows visitors to imagine the avant-gardisme of Expo 1967 and learn about the lasting effects it had on the city and further afield. 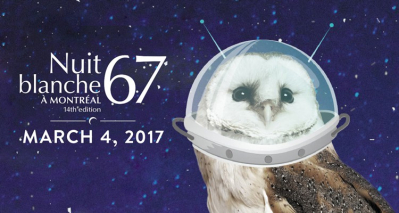 Many of the activities are taking place on the Parterre of St-Urbain Street and de Maisonneuve Boulevard, where Les Vikings will unleash a non-stop playlist of tracks exclusively from 1967. Music fans will also be able to enjoy the Vinyls Fair & 67s Dance Party at the Society for Arts and Technology (SAT), or rather the “Hommage à l’Expo 67” concert by Les Requins at the Musée McCord.

For those who love the design of the time, several venues are set to host exhibitions dedicated to the style, art and architecture that prevailed during the Expo. In preparation for the exhibition it will host later in the year, the Musée McCord is also hosting a sneak peak of “Fashioning Expo 67”, drawing attention to the era’s recognisable and quirky styles. Meanwhile at Espace Projet, the Expo’s cultural and urban legacy will be debated in an open-to-the-public discussion featuring artists and urban planners, and Laïka will be hosting an exhibition paying tribute to the Expo’s creativity.

To see the Expo in its full technicolour splendour, the Cinéma du Parc will be screening short clips of films captured during the course of the Expo. Under the theme “Expo67: Mission Impossible”, the Galerie Yellowfishart will be showing films and photos telling the story of the Expo from its conception through to the event itself. Additionally, a short documentary tracing the story of Montreal’s metro system, first built for Expo 1967, will be on show at the Nouveau Palais.