Expo 1957 brought together a remarkable group of internationally renowned “starchitects” to create residential buildings for a new style of neighbourhood. These included, to name but a few, Oscar Niemeyer, Arne Jacobsen, Alvar Aalto, Walter Gropius and Le Corbusier, as well as numerous urban planners, engineers, public transport experts, sociologists and economists, all gathered to create the “City of Tomorrow”. 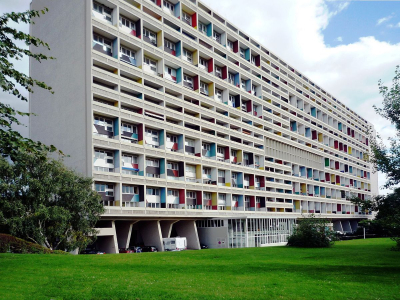 With the aim of reconstructing the district after its destruction during the war, these preeminent figures decided that in the new city, domestic life, work, leisure and transport should be distinctly separated. Greenery was used as a tool of both separation and unification between these urban elements. Gardens and trees became a central factor in the redesign of the area, a characteristic that one can still notice today while taking a stroll in Hansaviertel.

Among the many notable creations is an archetypal modernist apartment block designed by Walter Gropius, the founder of Bauhaus. The building has a distinctive decorative effect due to its concave structure, narrow sides and front-and-back protruding balconies and balustrades. Another prominent work is Le Corbusier’s Unité d’Habitation, which follows the style of his existing high-rises, featuring several “interior streets” as well as a plant terrace with a range of common facilities including an open-air theatre, medical services and school rooms.

The district remains today what it was created for: a residential neighbourhood surrounded by parks for families to enjoy the greenery. This blend of private and public grounds serves to unify the city, one of the standing legacies of the Expo. Once giving new life to a city destroyed by war, the colourful, modernist landscape of Hansaviertel continues to be appreciated to this day by residents and visitors alike.