The advent of electricity as an affordable commodity in the home triggered the development of a plethora of new products for the upcoming era, including television and equipment for cooking and cleaning.

The Expo’s forward-looking celebration of new home technologies was visible in the Electrical Products and Utilities Building and the Electrical farm, which were sponsored by companies such as General Electric (GE), Westinghouse and Consolidated Edison. These companies had successfully transformed electricity into the day-to-day commodity that it is today, consumed by households all over the world. 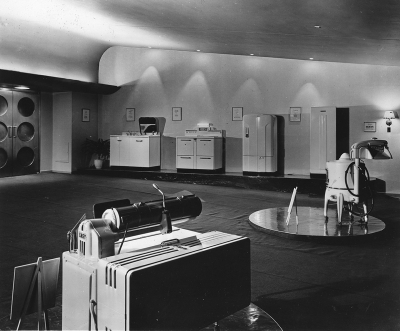 Vast crowds converged to witness the marvels of modern technology in the “Living room of the Future” which contained a fax machine and television, as the Expo predicted that in the future, there would be a television in every home. Also, GE showcased various electrical appliances, including a refrigerator, a vacuum cleaner, an all-electric sink and others in its state-of-the-art kitchen display featuring the character of “Mrs Cinderella”. The entertainingly dramatized story illustrated the possibility of a “happily ever after” for visitors, who envisioned a life with extra hours of freedom that would allow them to engage in other profitable activities.

The Westinghouse display was equally inviting with its dishwashing contest: “the Battle of the Centuries”, which showed visitors that maintaining a hygienic and efficient household was feasible if modern electrical appliances like an automatic dishwasher were used. A commercial film titled “You Can Have Everything” showed fairgoers that their dream of a better and healthier life could come true thanks to the impact of new technologies.

Expo 1939 New York showcased the democratisation of electricity and the improvements to living standards and economic development made possible by new technology. Progress continues today, as 1.2 billion people (16% of the global population) are still without access to electricity. In developing countries, the proportion of households without electricity is as high as 67%, showing that “Energy for All” – a subtheme of Expo 2017 Astana – remains a major developmental challenge.