For all visitors to Expo 1958, the Atomium was the main landmark, a monument representing the unit cell of an iron crystal magnified 165 billion times. Embodying the advent of the nuclear era and the progress of science, the 102-metre high structure was initially designed by André Waterkeyn alongside André and Jean Polak to last the duration of the Expo, but has since become an enduring symbol of Brussels.

Drawing over 41 million visitors over six months, Expo 1958 Brussels was the first event of its kind in Europe following the Second World War. Showcasing the latest technological innovations and achievements to a new cohort of consumers, the Expo presented the world of tomorrow, bringing together participants countries and promoting peace and progress.

From this weekend, the unforgettable experience of Expo 1958 is to be relived through the Galaxy 58 exhibition programme, recalling special moments from the Expo. Three exhibitions in the Atomium and in the adjacent ADAM - Brussels Design Museum will allow visitors to rediscover the magic of the Expo: People of 58 (unseen photos and video footage from the time), Graphic 58 (the innovative visual designs of Expo 1958) and Podium 58 (focusing on the fashion styles of Expo visitors on the eve of the 1960s). All three exhibitions will be open until the end of the year.

The celebrations this weekend are also being marked by a kid's "guinguette" and the launch of "Sourire 58" (Smile 58), an official comic book commemorating 60 years of the Expo. Created by Patrick Weber and Baudouin Deville, the special edition comic book is based around a young Expo hostess who finds herself in the midst of an intriguing tale. 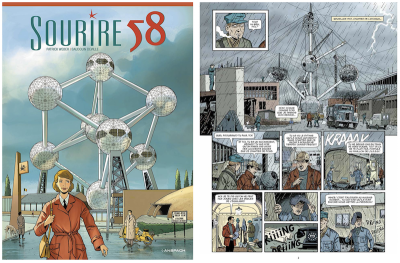 To give the anniversary an additional taste of the Expo, the Flobecq brewery is recreating a limited edition batch of "Flo 58", a beer originally produced for the Expo that proved popular among its visitors.

Beyond this festive weekend, a series of special events and entertainment activities will be organised throughout the Summer and until the end of the year. These will include weekend fireworks displays, a large bric-a-brac fair, a rock festival, as well as a special 1950s-themed performance by the Royal Chamber Orchestra of Wallonia, which was established in the same year as the Expo.

In addition to the Atomium, a number of other Belgium icons, from Expo 1958 and beyond, are celebrating their 60 years in 2018. These include the Brussels Convention Centre, now known as Square, as well as the famous blue characters The Smurfs (Les Schtroumpfs).