The fair’s ofﬁcial title was the 1986 World Exposition on Transportation and Communications (it was nicknamed “Transpo”) and it boasted 51 national pavilions, including the United States, along with seven Canadian provinces, two Canadian territories, three US states and seven major corporations. Attendance was 22 million visits.

The United States section, including the U.S. National Pavilion and the pavilions of Washington, Oregon and California, represented the largest non-Canadian presence at Expo 86. The US Pavilion theme was the US Space Program. The Challenger space shuttle disaster had occurred three months before the opening of the Pavilion and President Reagan in his opening letter at the pavilion’s entrance stated, “The people of the United States dedicate their Expo ’86 Pavilion to the memory of the seven CHALLENGER astronauts and to the other brave Americans who have given their lives in the saga of space exploration. Their courage, their skill, and their willingness to assume great risk have taught the rest of us an invaluable lesson.”

The Pavilion measured 2,323 m2 over two floors. Crowd flow was pulsed, with 200 people at a time. A tour of the pavilion took 30 minutes. Guides located at 13 points throughout the pavilion gave presentations enhancing the visitors’ journey through some 40 years of space exploration. Visitors entered the pavilion on the second level from an external skywalk. A History Catwalk followed the evolution of the American space program through scale models of the Mercury, Gemini and Apollo spacecraft as well as the Pioneer, Voyager and Viking, the robot explorers of distant planets.

Visitors then entered a theatre for a six-minute ﬂight aboard the Shuttle to a future when the planned Space Station would be operational. The voice of a NASA ofﬁcial at Mission Control provided a countdown. As the countdown continued, the sound of the booster rockets increased in volume until the entire theatre reverberated with their roar as the Shuttle lifted off. The ﬁlm provided a glimpse of life aboard a spacecraft and simulated the Shuttle’s docking with the International Space Station. 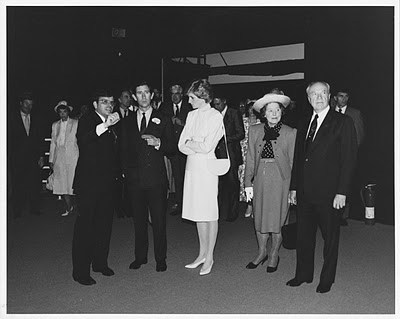 At the end of the film the doors below the screen opened and visitors moved onto a space platform where they could view a scale model of the Space Station, complete with a docked Shuttle and astronauts working on the Station’s exterior. Visitors then passed through a pair of life-scale mock-ups of living and working quarters aboard the station including experiments and living quarters.

The U.S. Pavilion at Vancouver received 2.5 million visitors over its six-month operation, including such dignitaries as the Vice-President of the United States, the Prime Ministers of Great Britain and Canada and the Crown Princes and Princesses of. Great Britain. For our family, our year in Vancouver was one of the most enjoyable of all our Expo adventures.