Today marks the 50th anniversary of the French national day at Expo 1967 Montreal, a World Expo with the theme “Terre des Hommes” (Man and His World) which focused on mankind’s progress and innovations.

The theme of the French pavilion was “Tradition and Invention”. Among the exhibitions that were showcased were a model of the bathysphere “Archimede”, a colour television manufactured in France, and objects from Jacques-Yves Cousteau’s marine expeditions. 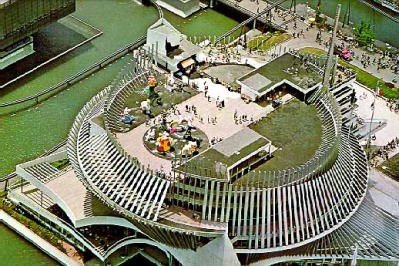 The pavilion itself was a concrete and steel structure covered in glimmering aluminum fins, designed by Jean Faugeron and André de Mot. Inside were eight floors of art exhibits, centering on an electronic light display that sent flashes of neon light up and down the length of the building. On the rooftop of the pavilion, visitors could appreciate nine sculptures by international renowned artist Niki de Sainte-Phalle and six kinetic machines by Jean Tinguely, specially commissioned for the Expo, while enjoying an amazing panoramic view of the entire Expo.

The ground floor of the French pavilion featured an exhibition dedicated to the City of Paris, which included a documentary by Francois Reichenbach that gave visitors the impression of walking around Paris, seeing its most beautiful sites and neighborhoods.

The national day’s celebrations at the French pavilion included a parade with musical accompaniment from an orchestra. Overlooking the parade was a stage where guests of honour, notably French president Charles De Gaulle, were seated. As French officials gave speeches to the crowd, the French and Canadian flags were raised on adjoining poles, symbolising the fraternity between the two nations. 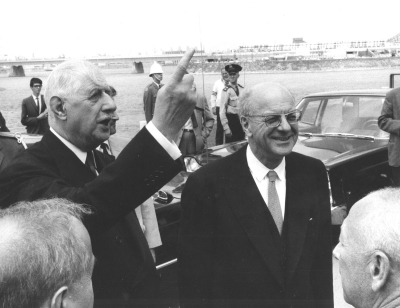 Despite this image of friendship, the national day ceremonies took place within a charged political context. During his visit to Montreal the previous day, Charles De Gaulle publicly proclaimed “Vive le Québec libre!” (Long live free Quebec!), creating a significant diplomatic incident between France and Canada. While the French President went on to visit the Expo the following day, the rest of his official tour in Canada was cut short.

While the diplomatic incident is now part of history, the French pavilion remains in place, now hosting Montreal's casino.