It was the event that welcomed a new century and showcased the greatest arts, creations and technologies from around the world. World Expo 1900 Paris, which closed its gates 120 years ago today, was a transformational event for Paris, for France and for the world. Discover five interesting facts about this historic gathering:

1. A new way to get around Paris: the metro

Expo 1900 Paris was the opportunity for the city to develop its first metro line. Connecting Porte Maillot in the west of Paris to Porte de Vincennes in the east, the city’s first metro line – now known as Ligne 1 – allowed the greatest number of people to travel to the Expo site in a quick and efficient way. 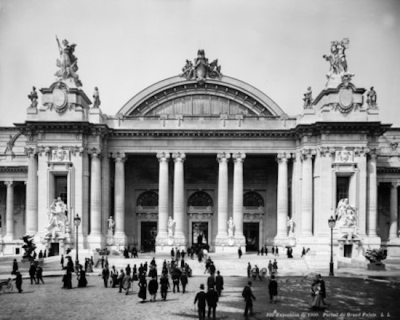 Between the Champs-Élysées and the Seine, two magnificent new palaces were built as exhibition buildings for Expo 1900. The Grand Palais, with its colossal nave, hosted the Expo’s fine arts exhibits, while its smaller neighbour, the Petit Palais, designed by Charles Girault, showcased a retrospective of French artistic talent.

3. A memorial to the Franco-Russian Alliance 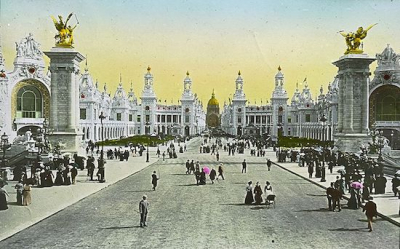 Connecting the right bank of the Expo 1900 site with the left bank exhibits, a richly decorated bridge was built, featuring gilt bronze sculptures representing Arts, Sciences, Commerce and Industry. This grandiose new bridge – the Pont Alexandre III – is named after Tsar Nicholas III of Russia, in honour of the Franco-Russian Alliance. In the same spirit, the Trinity Bridge was commissioned in St. Petersburg, and completed in time for the 200th anniversary of the city in 1903.

To ease the movement of the Expo’s visitors – of which there were almost 51 million at a time when France had a population of 41 million – Organisers put in place a moving walkway spanning 3.5 km around the Expo site. Capable of transporting up to 14,000 people at once, this fascinating form of transport was conceived by American engineers Joseph Lyman Schmidt and Max. E. Silsbe, who first created the technique for Expo 1893 Chicago.

5. An immersive voyage around the world 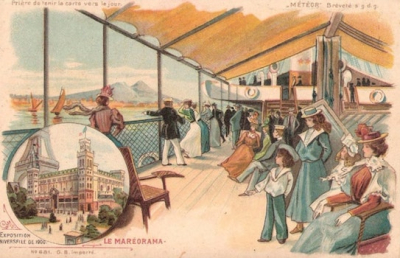 Visitors to the Expo had the opportunity to visit the pavilions of the 40 participating countries, but could also embark on an immersive journey via the Mareorama exhibit. This unique experience by Hugo d’Alési embarked visitors on a replica ship perched five metres above the ground, taking them on a visit through different cities of the world by using panoramic paintings and a motion platform. Going even further away, the massive 1900 Exhibition telescope exhibit allowed visitors to see the surface of the moon as if it was "one metre away", while Eugène Hénard's giant kaleidoscope made use of mirrors and optical illusions to create a reality-twisting experience.

Find out more about Expo 1900 Paris