170 years ago today, the United Kingdom invited ‘All Nations’ to the Great Exhibition of 1851. Taking place in Hyde Park between 1 May 1851 and 11 October 1851, Expo 1851 London was an occasion for the United Kingdom and international participants to showcase human progress, notably in the area of industry and technology.

Here are some interesting facts about this unique global event:

Titled “The Exhibition of the Works of Industry of All Nations”, Expo 1851 London was spearheaded by Prince Albert, Queen Victoria’s husband, and a civil servant and inventor named Sir Henry Cole. While national exhibitions had already been organised, the idea behind the Great Exhibition was to gather exhibitors from all around the world, notably with the aim of encouraging the exchange of ideas, talent and craftmanship. The event proved an overwhelming success, receiving more than six million visitors and capturing the attention of celebrated figures including Charles Darwin, Emily Bronte and Lewis Carroll, as well as Queen Victoria herself who visited on numerous occasions and noted that the Expo featured “every conceivable invention”.

2. The best of the world’s creations 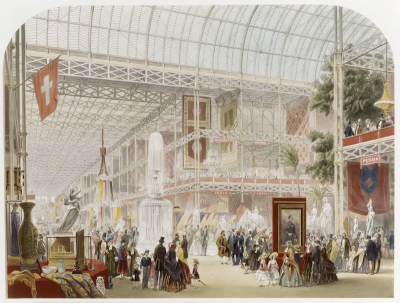 Having the unprecedented opportunity to showcase their culture, products and progress to an international public, nations from around the world were keen to send exhibitors. Among many other countries, Switzerland brought gold watches; Chile, a single lump of gold weighing 50kg; Russia, huge vases and urns twice the height of a person; the United States, various agricultural machinery and award-winning vulcanised rubber. Visitors could also discover robes, precious textile works and carpets from Anatolia, porcelain and hanging lanterns from China, and pearl-embroidered coats from India. 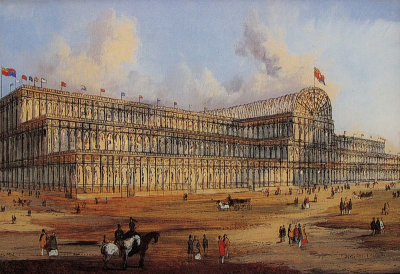 What housed all these treasures was the ‘Crystal Palace’ – an unprecedented building in many ways. This iron and glass exhibition hall, designed by horticulturalist Sir Joseph Paxton, was the largest building made of glass at the time, standing at 563 metres long, 124 metres wide, with a central transept 33 metres high. Thanks to a prefabrication method, the impressive structure was assembled in only five months, and even incorporated two existing trees within its bright halls.

4. “Spending a penny” in the Monkey Closets

With the growing recognition for public hygiene and the need to provide facilities to thousands of visitors in one place, Organisers were faced with a sanitary challenge. To provide relief to thousands of visitors at a time when public hygiene was of growing concern, Organisers installed the “Monkey Closets” in the Retiring Rooms of the Crystal Palace, featuring clean and flushing toilets – a new invention by George Jennings. To recoup the cost of this, visitors were charged one penny to use the facilities, coining the idiom “to spend a penny”.

As the Great Exhibition came to a close, Prince Albert expressed a vision to “increase the means of industrial education and extend the influence of science and art upon productive industry”. Thus, to perpetuate the Expo’s mission, its profit of £186,000 (equivalent to over £18 million today) was used to buy 96 acres of land in South Kensington, an area known as “Albertopolis” and to establish institutions such as the V&A and the Natural History Museum and the Science Museum; the Royal Colleges of Art and Music; Imperial College and the Hall of Art and Science (now the Royal Albert Hall). This world-renowned cluster today collectively attracts more than 30 million visitors each year – successfully imprinting the legacy of the Great Exhibition for 170 years thus far.

Find out more about Expo 1851 London.