Eighty-five years ago today, on 25 May 1937, countries from around the world gathered in Paris for the opening of a six-month World Expo dedicated to arts and technology in modern life. Taking place in a unique context of geopolitical tensions and social change, the works of art commissioned for Expo 1937 Paris stood out not only for their scale, aesthetics, and creative significance, but also for their political and social meaning. Here are five iconic masterpieces, all created for Expo 1937 Paris:

Painted by Pablo Picasso for Spain’s pavilion at Expo 1937 Paris, Guernica became one of the most powerful and recognisable anti-war statements of the 20th century. Featuring a distorted tangle of human and animal figures on a 3.5 x 7.8 metre canvas, Guernica was a heartfelt response to the aerial bombing of the eponymous town during the Spanish Civil War, testifying to the horror that the war was causing. The emblematic painting is nowadays on display in the Museo Nacional Centro de Arte Reina Sofía in Madrid, Spain.

Raoul Dufy created the spectacular Fée Electricité to tell the story of electricity, portraying historic discoveries and its modern uses across a 600m2 painting that was commissioned as the centrepiece of the Electricity Pavilion. Ten metres high and 60 metres long, the vast tableau was painted in only 10 months thanks to the Maroger technique which allows the paint to dry quickly. The masterpiece is today displayed in the Paris Museum of Modern Art, where it occupies a room to itself.

Fernand Léger painted Le Transport des Forces to ornate the Palais de la Découverte, a wing of the Grand Palais converted into a science museum for Expo 1937. Celebrating the transformation of natural forces and electricity in particular, the 8.7 long by 4.9 metre high painting is a tribute to artistic creativity and the belief in technical progress. The work, which was later slightly modified by the artist after sustaining damage, was recently on display at the Musée national Fernand Léger in Biot, France. 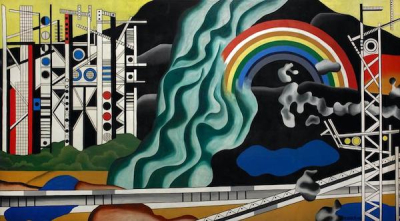 Decorating the walls of the Aviation Pavilion at Expo 1937 were three murals by Sonia Delaunay, with Hélice (Propeller) sitting alongside Moteur d’avion (Aeroplane Engine) and Tableau de bord (Dashboard). The brightly coloured, seven-metre wide paintings depict an abstract composition of mechanics and technical blueprints, and earned Delaunay a gold award. They were not her only works to feature at the Expo - along with her husband Robert, the couple contributed murals to the Railway Pavilion. Hélice, Moteur d’avion and Tableau de bord are all now on display in the Skissernas Museum in Lund, Sweden.

As with Guernica, the Alexander Calder’s mesmerizing Mercury Fountain was also commissioned for Spain’s pavilion at Expo 1937. Calder, the only non-Spanish artist to contribute to the pavilion, was asked to create a work that paid tribute to Aldamén – known for its mercury mines and at the time under siege from Nationalist forces. The fountain uses a pump and metal troughs to create a dazzling liquid metal fountain. The work, with a new pond and water fountain built in 1976, can now be seen, behind glass protection, at the Fundació Juan Miró in Barcelona, Spain. 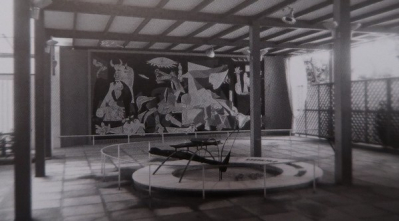