Azerbaijan has been a member of the BIE since 2008. Its first Expo participation since gaining independence in 1991 was at World Expo 2000 in Hannover. The Azerbaijani pavilions at World Expo 2015 Milan and Specialised Expo 2017 Astana were among the most popular in terms of visitor numbers.

Theme
Seeds for the Future

Theme
Land of Fire - Energy from past to future

Azerbaijan’s pavilion at Expo 2017 Astana was centred around the country’s own energy resources with the theme “The Land of Fire: Energy, from Past to Future”. The theme traced the story of energy from the past to the present and on to the future, portraying a continuation of the historic Silk Road.

The journey into the pavilion began by entering a tunnel featuring some of Azerbaijan’s cultural treasures, including rugs, ancient engravings and tradition forms of clothing. This led to the main exhibition area, which showcased the country’s energy resources – both traditional and alternative – by virtue of interactive games and displays. 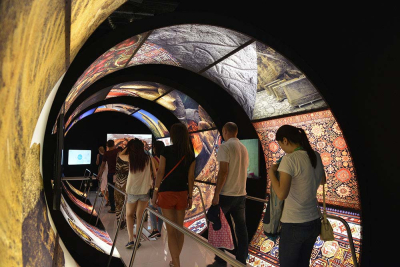 Azerbaijan’s status as a major producer of hydrocarbons was a focus of its participation in Expo 2017, with displays of drills bits, games to correctly drill for gas, and examples of different types of oil and their uses. Large maps and displays also conveyed the country’s importance as an energy supplier to Europe, and the significant energy infrastructure that this entails. Visitors could also learn about the promise of gas hydrates, the high-energy “burning ice” in the Caspian Sea that has yet to be harnessed. 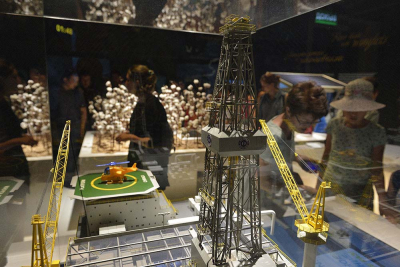 The promise of renewable energy was highly visible throughout the pavilion, with visitors able to experience wind and water energy with all their senses via a wind machine and walls of water. Visitors could learn about Azerbaijan’s transition towards alternative forms of energy, including the use of cotton remains as biofuel. 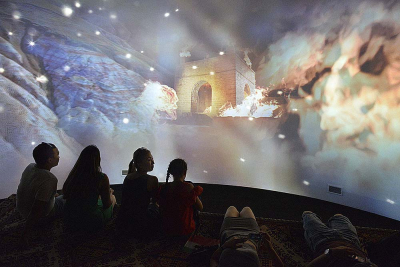 In the final part of the pavilion, visitors could lie on a traditional Azeri rug, a symbol of the country’s culture and handicraft, while viewing a video presentation on the “Land of Fire”.

Theme
Azerbaijan, a Treasure of Biodiversity

Theme
Life in harmony with the Sea

Theme
At the Crossroads between East and West