Theme
Be part of the theatre in nature; get closer to the quality of life

Horticultural Expo 2012 Venlo was the sixth Floriade organised under the auspices of the BIE,  being recognised by the 144th General Assembly on 2 December 2008. Opened by Queen Beatrix on 4 April 2012, the Floriade welcomed over 2 million visitors during its six-month run, of which 52% came from outside of the Netherlands.

Organised under the theme “Be part of the theatre of nature; get closer to the quality of life”, the Expo was designed as an event to inspire rather than to instruct. The Netherlands Horticultural Council aimed to make the visitor experience a sustainable positive memory, and thus the “cradle-to-cradle” sustainability principle was adopted. Developed in cooperation with German chemist Michael Braungart and American architect William McDonough, this innovative principle is based on circularity and sustainability, with a focus on the recycling of raw materials. 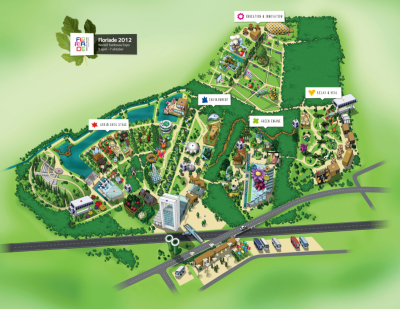 The Expo site was developed in line with these principles of sustainability, with the organisers making maximum use of the natural topography and preserving 25 ha of existing forest. Overlooking the site was the Innovatoren, a 70-metre conference centre designed by Jo Coenen and built using the cradle-to-cradle concept. Another key Expo building using this concept was Villa Flora, the main indoor exhibition pavilion, designed by Jon Kristinsson.

The 66-hectare site was divided into five main areas, reflecting the five subthemes:

A cable car ran through the middle of the site to facilitate access and to give visitors the chance to appreciate views of the various gardens and wooded areas.

In addition to the large Netherlands national pavilion – whose key exhibit “My Green World” received over 1 million visits – a total of 38 international participants took part in the Floriade via indoor exhibits or outdoor gardens.

Visitors could also enjoy the Floriade’s bustling cultural scene, with over 3,000 performances including picnic concerts, international harvest shows, musical shows from 157 different artists, and the ‘Floriade by night’ weekend light shows. Organisers also commissioned 10 individual pieces of art that were installed throughout the Expo site, all of which reflected the theme of the Floriade and were designed to be in harmony with the landscape.

In addition to the Expo’s wide range of exhibits, the Floriade addressed thematic questions via the “Floriade Dialogue”, a programme which started in 2009 and was developed in the run-up to and during the Expo. Inspired by Expo 2000 Hannover’s Global Dialogue initiative, the forum gathered international experts from science, business and government to discuss key thematic issues including food production, the built and natural environments, sustainable growth, and quality of life. The conclusions of the Floriade Dialogue were compiled in the “Our Planet is Plant” report, which laid out key principles to set the agenda for 2020.

Following the Floriade, in accordance with the planning strategy, 90% of the site was transformed into the Venlo Greenpark innovation complex with the maximum reuse of buildings and facilities. Notably, the park offers office space in the Villa Flora for entrepreneurs and researchers working in the area of agriculture and sustainability.