Floriade 2002 Haarlemmermeer was the fifth Horticultural Expo to be organised in the Netherlands under the auspices of the BIE. It was recognised by the BIE General Assembly on 12 June 1997 and was opened to the public by Queen Beatrix on 25 April 2002.

With the motto “Feel the Art of Nature”, the Expo’s organisers opted to address the enjoyment of nature alongside the importance of living in a sustainable and environmentally-friendly manner. 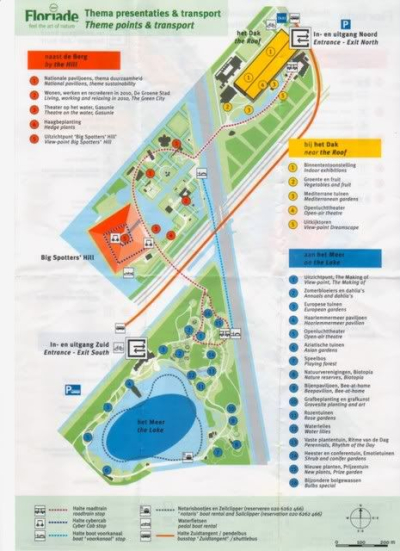 Located in a polder next to Schiphol Airport, in the Amsterdam metropolitan area, the Niek Roozen-designed Expo site included a wooded area - the Haarlemmermeer Bos – as well as ten connected islands surrounding “Spotters Hill”, a 40-metre pyramid. In line with the environmentally focused theme, the site was developed with the existing landscape in mind, integrating existing trees and plants, including a century-old plane tree.

The Expo site’s “By the Hill” section, located around Spotters Hill, was focused on future living, featuring the “Green City” as well as a wide range of Dutch exhibits focused on the promotion of a sustainable and natural environment. The other main section – “On the Lake”, was focused on nature, with dense woodland and winding paths, as well as the international gardens on the edge of the lake and on the water itself. In addition to the European gardens, the exotic Asian gardens and the Thai pavilion, this section featured the world’s largest collection of water lilies and the “one million blooms” in the Valley of Flowers.

The sustainability focus extended across the whole site, which was entirely powered by a solar roof totalling 19,000 solar panels – the largest in the world at the time. Under the solar roof, 30 sub-tropical plant species could be found, while nearby, the Glasshouse of the Future showcased the latest technologies in plant cultivation, including automatically rotating beds to maximise light exposure and reduce growing time for fruit and vegetables.

Aside from the horticultural exhibits, the varied architecture of the site was another major draw for visitors. The Haarlemmermeer pavilion, known as the “HydraPier”, paid tribute to the boundary between land and water in an area lying below sea-level. Designed by Hani Rashid, the pavilion appears to jut out from the polder and features a continuous flow of water from the inclined roof onto the glass walls. Meanwhile, the “Layered City” (Gelaagde Stad) complex was an innovative demonstration of how modern buildings could be integrated into existing landscapes.

After welcoming over 2 million visitors during its six-month opening, the Floriade site was transformed into “De Groene Weelde”, a large recreation area that is popular for its varied gardens and for the recognisable Spotters Hill. Each summer since 2003, the site has hosted popular Dutch musical festival Mysteryland. The area under the solar roof is now home to “Expo Haarlemmermeer”, a large exhibition centre that underwent a major expansion in 2017.