Theme
The Challenge of a New Road of Development

The Republic of Korea organised a Specialised Expo in Daejeon (Taejon) in 1993, commemorating the centennial of the first ever Korean Pavilion at a World Expo, in Chicago in 1893. The Expo, which was recognised by the 108th session of the General Assembly of the BIE on 12 December 1990, was the second major event to be organised by the Republic of Korea following the Seoul Summer Olympics in 1988, and was part of Daejeon’s objective to become an internationally recognised hub of science and technology.

Organised around the theme ‘The Challenge of a New Road of Development’, the Expo came at a time of rapid economic development in the country. The theme reflected increased national and international awareness of environmental issues associated with growth.

Exhibits at the Expo followed two subthemes – ‘Traditional and Modern Science and Technology for the Developing World’ and ‘Effective use of resources and recycling’ – proposing alternative solutions and technology in favour of green development.

Expo 1993 focused on cultural programs as well as high-tech inventions. Through folklore festivals and opera performances, the Expo also provided visitors with a better understanding of ancient, traditional, and modern Korea.

The Expo site, which was split into an international zone, a corporate zone and an amusement park, was located in the Doryong District within the Daedok Science Town. 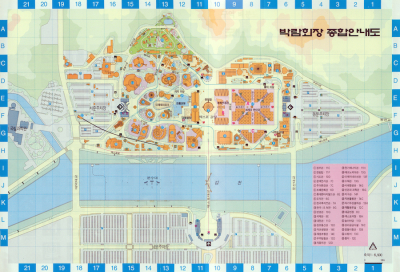 Some very popular attractions were in the Corporate zone, which had a crystal-like design. Korean electronics firms invested large sums to showcase the latest cinematic technologies, screening IMAX 3D films on the history of Earth (Ssangyong), the history of civilisation (Daewoo), or the simulation of a space journey (Samsung).

The amusement park was named ‘Kumdori Land’ after the Expo’s astronaut-like mascot, who personified the human dream of science and technological progress.
The Expo site was centred around Han’bit-Ap, or the Tower of Great Light, a 93-metre tower which remains open to this day. Its concept, based on the motifs of light, science, and universe, embodied the connection between the wisdom of the past and the present, and the willingness to leap into the future.

The lower section of the Tower, made with 1,993 granite bricks, pays homage to Cheomseongdae, a 7th century astronomical observatory located in Gyeongju. The middle part of the Tower, symbolising the present, portrays the scientific developments in the Republic of Korea at the time. The cone-shaped top section represents the future, illustrating the advancement and determination of the Korean people.

The International Zone was located in the centre of the Expo site, with participation from 108 countries and 33 international organisations. Visitors could discover new technological solutions to produce energy from clean and renewable sources, as well as innovative forms of transport such as the high-speed Maglev train.

The Pavilion of France showcased many of the country’s achievements in transport and urban planning, including a model of the high speed TGV train, a prototype electric car, and innovative solutions for managing industrial and household waste. As the Republic of Korea was starting to develop high speed rail, the French delegation was keen to showcase the country’s expertise, with President François Mitterand paying a visit to the Expo on 15 September.

The Canadian Pavilion proved popular with visitors due to its high-tech exhibits and a simulation theatre in which the audience watched a six-minute film on moving platforms. The pavilion notably highlighted Canada’s transport industry, including a car simulator that allowed visitors to drive around the streets of Quebec.

Russia’s Pavilion drew attention to the country’s achievements in space travel and exploration, including a life-size model of the 13-metre long Mir space station. The pavilion also included exhibits highlighting new technologies and materials to reduce the environmental impact of energy generation and industry.

Expo 1993 was a major success for Daejeon and the Republic of Korea, attracting over 14 million visitors and demonstrating the country’s capacity to host mega-events. The Expo improved the status and visibility of Daejeon, both nationally and internationally. In the years following the Expo, Daejeon and its surrounding area have continued to grow, with the further development of transport links and the relocation of administrative activities from the capital.

In 1994, the site reopened under the name of Expo Science Park, an amusement park dedicated to science and technology.