Theme
The Age of Discovery

A project for Spain

Registered by the 93rd General Assembly of the BIE on 15 June 1983, Expo 1992 was organised to present the new positioning of Spain. As soon as Juan Carlos I ascended the throne after General Franco's death, he announced the country would host a World Expo. Sixteen years later, with Expo in Seville, the country was able to exhibit its cultural diversity through the pavilions of the Autonomous Regions and to ensure its position in Europe and on the international stage, in part thanks to the presence of the European Community Pavilion located on the "Avenue of Europe".

A reflection of History

The Expo was prepared for the most part during the Cold War, but its opening took place after it ended, which had important consequences on the organization of the event. Following the fall of the Berlin wall and the reunification of Germany, there were no longer two but one pavilion to represent the country. Georg Lippsmeier's pavilion designed for the Federal Republic of Germany was chosen for this purpose. The USSR pavilion became the Russian Pavilion, while Estonia, Lithuania and Latvia presented themselves as newly independant countries under the common roof of the Baltic countries pavilion. The Expo was also impacted by other historical events such as the Gulf War that impeded Iraq from participating.

The theme of the Expo was "The Age of discovery" to celebrate the 500th anniversary of the discovery of the Americas by Christopher Columbus. The Isla de la Cartuja, where the explorer is said to have lived before his journey, was chosen to host the Expo.

The Road of the Discoveries

The historical Puerto de las Indias, entryway to the Expo site and the monastery of La Cartuja were both included in the event along the main avenue of the Expo: the Road of the Discoveries. The avenue was composed of 10 thematic pavilions that embarked visitors on a journey through time where they could witness the evolution of science, technology and culture over 500 years. Among other attractions, they were able to board a XVth century caravel before hopping on a spaceship.

The city of Seville benefited greatly from the works done to ensure a high-quality Expo. The airport built a new terminal; a more functional train station replaced the two stations of the city; a new high-speed line was created to link Seville to Madrid; highways were built and the Barqueta, Alamillo, Cartuja and El Cachorro bridges were erected to facilitate the access to the Expo site.

The Expo had a very positive impact on the image of Andalusia as it allowed the region to showcase its organisational and logistical skills.

The transformation of the Site

The Cartuja Island, once the Expo ended, became Cartuja 93, a technical and economic development center. Several pavilions were kept, such as the Puerto Rican pavilion, and turned into offices. Additionally, an amusement park was created near the Lake of Spain. 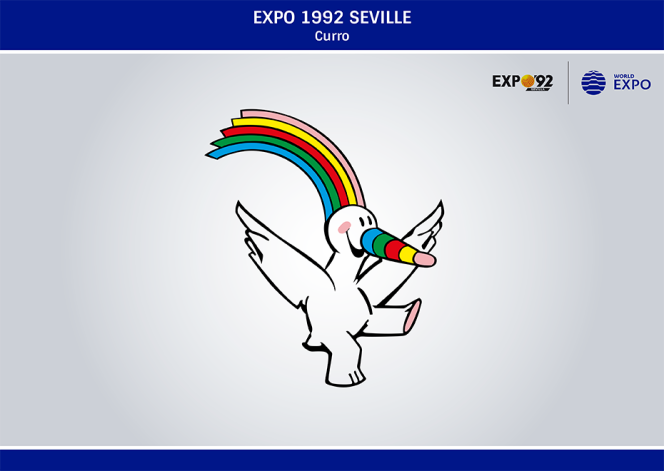 Curro, the mascot of World Expo 1992, was designed by Heinz Edelman and chosen from 23 designs coming from 15 different countries. His name, Curro, comes from the nickname given in Andalusia to those named Francisco.

A predominantly white bird with the legs of an elephant, Curro’s crest and beak are multi-coloured. Each of the five colours represents a different continent. Curro is a cheerful, curious and affectionate character with plenty of energy. Today, more than 25 years after the Expo, Curro remains in the memories and hearts of all visitors to the Expo.