Theme
The Harmonious Coexistence of Nature and Mankind

After having hosted World Expo 1970 in Osaka, Japan organised a Horticultural Expo in the city in 1990. Recognised by the 99th General Assembly of the BIE on 4 June 1986, the Expo – the first of its kind in Asia – was opened by Crown Prince Naruhito on 1 April 1990.

Osaka City and the Japanese Government shared the objective of holding an international exhibition as part of a wider strategy to promote environmental issues and to triple the amount of green space in Japan. The selected theme - “The Harmonious Coexistence of Nature and Mankind” – reflected this objective and looked towards creating a more humanistic world for the 21st century. 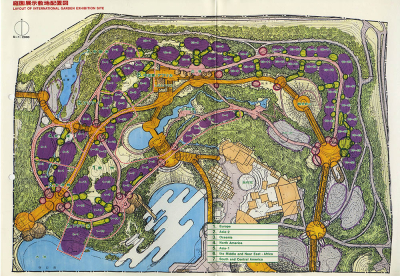 The Expo site, which was located in Tsurumi Ryokuchi, around 8km east of the centre of Osaka, was developed on a former industrial site and waste dump that had been lying empty. Spanning 140 hectares, it was divided into three principal zones:

Spanning the Sea of Life and connecting the Field Area with the Mountain Area, the Flower Cabin Ropeway offered visitors a panorama of the whole Expo site. In the City Area, the elevated Waterride track was an alternative and entertaining way to appreciate views of the different pavilions and gardens.

From a horticultural perspective, a vast array of flowers were on display throughout the Expo site, and particularly in the Valley of Flowers and the Floracapade Circus. Other outdoor favourites included a Bonsai exhibit, a 3,800m2 rose garden featuring 450 varieties of the flower, and an Ōga Lotus garden. Among the indoor exhibits, Osaka City’s Sakuya Konohana Kan (Great Conservatory) showcased 15,000 plants from 8 different cultivation zones from across the world, while Osaka Prefecture’s Gingko Pavilion explored the relationship between nature and Osaka’s population since ancient times. The corporate pavilions in the City Area all touched on the Expo’s theme, using the latest technologies to illustrate photosynthesis, or taking visitors on a journey into a living plant cell.

Daily entertainment was a key part of the Expo experience, including a parade through the site, as well as a popular Moses-inspired “parting” of the Sea of Life. Temporary events also drew large crowds, such as the Landscape Opera Gaia in May, and the Japan Day celebrations on 7 June.

Setting a new record for Horticultural Expos, a total of 83 countries participated in Expo 1990 Osaka, of which 44 designed their own national gardens. National day celebrations were held throughout the Expo, with several high-profile visitors including Princess Maha Chakri Sirindhorn of Thailand, Prime Minister Anibal Cavaco Silva of Portugal, and Prince Bernhard of the Netherlands.

After gathering 23 million visitors, the Expo site was transformed into a commemorative park, embodying the national commitment to increasing green spaces. The park offers a large recreational area for local residents while maintaining many of its horticultural features from the Expo, including blooming flowers all year round.