Theme
Leisure in the age of Technology

Expo 1988, recognised by the 94th session of the General Assembly of the BIE on 7 December 1983, took place in Brisbane, the capital of the Australian state of Queensland, and coincided with the 200th anniversary of European settlers reaching Australia. The Expo, which was opened by Queen Elizabeth II, was the event organised in 1988 to celebrate the bicentenary, with organisers keen to give the Expo a unique Australian character.

A total of 18.6 million visitors attended the Expo, higher than Australia’s total population at the time, which was 16 million. 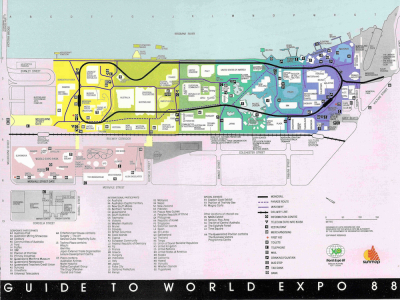 Leisure as the expression of culture

The Expo was focused on “Leisure in the Age of Technology”. The theme allowed the Expo’s participants to demonstrate how leisure is pursued in different cultures, and to focus on the important link cultural development and the pursuit of leisure. The Expo was also host to a number of conferences on issues related to sport, including its history.

Participants were keen to demonstrate their own version of leisure. The Swiss pavilion featured a 40-metre ski slope, the German pavilion had a beer garden, and the sports-focused US pavilion featured an outdoor sports court at which numerous top level athletes performed.

The ‘Sunshine State’ welcomes the world

The Expo site was developed to allow numerous outdoor activities and performances related to leisure, with numerous outdoor eateries and entertainment venues surrounded by lush vegetation and tent-shaped “sun sails” to protect visitors from the Queensland heat.

Visitors could get around the park via a monorail, which passed directly through the Queensland pavilion, one of the Expo’s major attractions. The pavilion, which recreated the Australian outback and recounted Aboriginal legends, featured a people mover system to transport visitors between exhibits. The system was first used by the Mitsubishi pavilion at Expo 1985 in Tsukuba.

Participation was notably high from the Asia-Pacific region. Several island nations, including the Solomon Islands, Tonga and Vanuatu, made their first appearance at an Expo via the Pacific Lagoon, which was made up of traditional thatch and wood structures.

The Expo site, which was formerly a run-down industrial zone near the city’s port, was converted into a park now known as the South Bank Parklands. The park notably features the Nepal Peace Pagoda, a three-storey wooden structure that is the only international pavilion to remain on the Expo site.

World Expo Park, a theme park that accompanied the Expo, was redeveloped into the Brisbane Convention & Exhibition Centre.