Theme
Dwellings and surroundings – Science and Technology for Man at Home

Science and Technology for Man at Home

The idea to hold a third Expo in Japan dates from 1978, when the Ministry of International Trade and Industry first proposed the organisation of an Expo centred on how science and technology could shape the future. As an important centre of research which boasted the facilities of the Tsukuba Science City, Tsukuba was chosen as the host of the Expo. The Expo, which adopted the theme ‘Dwellings and Surroundings – Science and Technology for Man at Home’ was approved by the General Assembly of the BIE in April 1981.

The objectives of this theme were to showcase man’s relationship with science and technology and to enable the general public to enhance their knowledge of the sector through participation and personal experiences.

In 1982, only 30 months before the opening, a ground-breaking ceremony was held at the main gate of the Expo site. 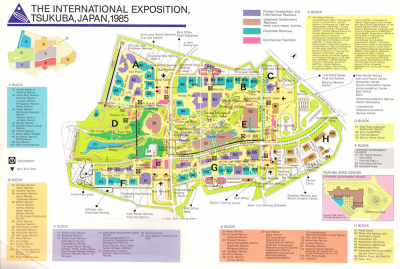 Japanese advancements in Science and Technology were highlighted by the Japanese Government through the Tsukuba Expo Centre, the Theme and the History Pavilions, and numerous corporate pavilions showcasing the latest technology of the time.

The Tsukuba Expo Centre highlighted Japan’s scientific and technological research and development. It included the Cosmic Hall zone, which featured the first HDTV system, as well as the Science Forum, which displayed information and answered questions in 16 different languages.

The Theme Pavilion was divided into two main sub-themes. ‘My Land’ was designed to portray the diversity of nature and Japan’s natural resources, including the technology required to make use of them. ‘My Life’ explained the role of mankind as a part of nature, representing life as it is today as well as a vision of future life
The History Pavilion illustrated the past, present, and future of Japan’s science and technology, telling the story of how Western science was introduced in Japan and then was further developed by Japanese scientists. The three zones of the pavilion focused on ‘Technology and Independence’ in the Meiji era, ‘Iron and Rice’ in the middle ages, and ‘Science and its Fruits’ in the modern period.

The corporate pavilions were some of the most popular attractions at the Expo, with the Fuyo Robot Theatre, the Suntory Pavilion and Mitsubishi Future Pavilion all having unique designs. The monorail system used in the latter was later recycled and used at Expo 1988 in Brisbane, where it carried visitors around the Queensland pavilion.

A Children’s Plaza playground was located at the centre of the Expo site and was designed to help children understand science and technology through entertainment and recreation. One of its most popular features was the ‘Fun Tube’, consisting of a large meandering pipe where visitors could experience a range of sensations including wind, rain, fog, echoes, and reflections. The Mechanical Zoo was also popular, with its machines mimicking the movements of live animals on land and in water, including a remote-control frog.

International participants were divided into four main groups, each located in a different area of the site. The USSR’s pavilion focused on the country’s technological achievements, notably in the area of energy, housing, education and culture. Achievements were also showcased in the British pavilion, which demonstrated the country’s efforts to contribute to a better and healthier world for all.

The French pavilion featured models of French urban landscapes, including a section dedicated to Paris, a display of suburban redevelopment, a model home for the disabled, and a model of the town of Orme, where modern architecture had been designed to be in harmony with the surrounding environment.

The pavilion of the United States focused on artificial intelligence, showing the achievements that had so far been accomplished and the potential impact of this technology on humans. One exhibit, dubbed ‘Robots that think’, showed robots solving Rubik’s cubes and complex mathematical problems. The pavilion sought to demonstrate how the country’s culture of openness has helped contribute to research and information technology.

Many developing countries participated in the Expo, which encouraged the exchange of new technologies and innovations.

Attracting 20.3 million visitors, Expo 1985 was a major success, making it the third most visited Specialised Expo ever held, after Expo 1986 in Vancouver and Expo 2005 in Aichi. The Expo came as a major boost to the Tsukuba Science City, improving its infrastructure and connecting Tsukuba with the Joban Expressway. Today, Tsukuba is home to 60 public and 240 private research institutions, proving its status as a major science and technology hub.