IGA Expo 1983 Munich was the third Horticultural Expo in Germany to be organised under the auspices of the BIE, receiving recognition from the General Assembly on 12 June 1980. Opened on 28 April by Federal President Karl Carstens, the Expo received an average of 250,000 visitors per day, totalling 11 million visits during its six-month run.

The Expo site was developed along a 3.5km-long unregulated mixed-use plain in the western part of the city, to be known as “Westpark”. Landscape architect Peter Kluska was tasked to conceive a park suitable for physical and mental recreation in a busy urban area that was previously lacking green spaces. The development works involved moving 1.5 million cubic metres of soil and planting 6,000 large trees.

The resulting park was a newly created “natural” environment with mostly indigenous species, including lime trees and elm trees in the central part, and oaks and beeches in the border areas. Split between the western and eastern sides of the highway, the Expo site evoked a valley landscape with varying heights and hollows. 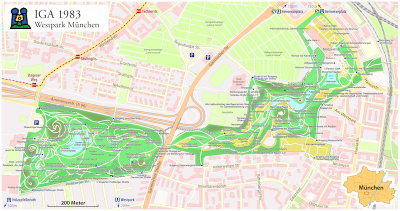 The site of IGA 1983 was structured as one large garden of gardens. With a total of 171 exhibits, the Expo featured 45 themed gardens and 23 national gardens. The latter in particular allowed visitors to discover a wide array of horticultural traditions from across the world. The Mediterranean and Asian sections proved particularly popular among visitors, notably the Sardinian garden, the Japanese cherry blossoms, and the colourful Thai sala.

IGA 1983 also boasted a diverse cultural programme, featuring a theatre with music and dance performances as well as varied entertainment activities during participating nations’ national weeks. Furthermore, artwork could be found throughout the site, including Hoch Wiesen Haus, a remarkable architectural model by Friedensreich Hundertwasser, who also designed the Expo’s poster.

After the Expo closed its gates, the Westpark was maintained as a recreation area for the city of Munich. To this day, it remains a popular recreation spot that still boasts many of the Expo’s key features, including the Asian gardens, Hoch Wiesen Haus, and a wide variety of perennials.