After the enormous success of Expo 1970 in Osaka, Japan started planning a second Expo, on the island of Okinawa. The Government chose this location to address issues of inequality between Okinawa and other regions of the country, and to commemorate the reversion of the island to Japanese administration.

An oceanographic theme was chosen for the Expo, with the motto being ‘The sea we would like to see’. During the Expo 33 countries from all over the globe participated, including Canada, Australia, Italy, USSR, and many others. The Expo was recognised by the 71st session of the General Assembly of the BIE on 25 May 1972, and the Japanese Ocean Expo Association approved the Expo’s Masterplan in October 1972. However, concerns over the oil crisis caused the opening of the Expo to be delayed by four months until 20 July 1975. It then remained open until 18 January 1976. 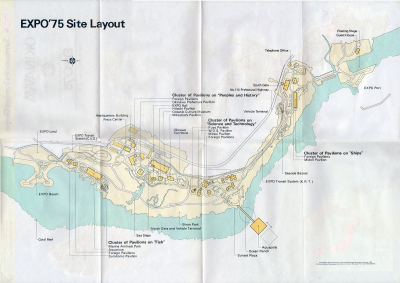 Rather than letting participants of the Expo build their own Pavilion, as was the norm, international countries were encouraged to rent pre-fabricated rectangular or hexagonal shaped modules, each with an area of around 250m2.

The USSR Pavilion was memorable as it included the world’s first large-scale map of the ocean introduced. Another impressive pavilion was that of the United States, one of the largest on the site. Inside, the pavilion showcased past, present and future technologies, including a demonstration of an ocean thermal power plant, and ongoing research on air-sea interactions.

The site was composed of four clusters, each of which was based around a specific theme.

The People and History Cluster featured two international pavilions, the Okinawa Pavilion, the Expo Hall, the Hitachi Pavilion, the Mitsubishi Pavilion and the Oceanic Culture Hall. The latter drew interest for its audio-visual hall as well as an exhibition hall showcasing ships, carvings, and cultural objects from around the Pacific Ocean.

The Science and Technology Cluster was focused on the need for international cooperation and research in favour of the protection of the world’s oceans and water resources. In addition to several international and corporate pavilions, this cluster included the Mitsui Children’s Science Pavilion, and ‘World Ocean Systems’, a large theatre in the shape of a whale.

In addition to the thematic clusters, visitors could enjoy the attractions of Expo Land, an amusement park beach, featuring water-themed attractions including the chance to canoe through a waterfall.

The centrepiece of Expo 1975 was Aquapolis, a ‘floating city’ that sat 32 metres above the sea, next to the Science and Technology Cluster. Designed by Japanese architect Kiyonori Kikutake, the futuristic city cost 14 billion yen (US$ 41 million) and was a prototype marine community. Aquapolis remained in place after the Expo, continuing to attract visitors for several years until it closed in 1993.

At the end of Expo 1975, the site was transformed into the Okinawa Commemorative National Government Park, also known as the Ocean Expo Memorial Park. The park includes the Oceanic Culture Museum, as well as the Native Okinawan Museum, the Tropical and Subtropical Arboretum, and the Okinawa Churaumi Aquarium. The aquarium, which opened to the public in November 2002, is one of the largest in the world, with its main tank holding 7,500m3 of seawater.

While the Expo did not reach its visitor target, it had a significant economic impact on the island. The project came as a boost to Okinawa’s development, with infrastructure being improved following the construction of motorways, water supply systems and modern hotels. The Expo also had a significant impact on the image of Okinawa following decades of U.S. military control.