Austria organised its second Horticultural Expo in 1974, a decade after the first edition. WIG Expo 1974 Vienna was recognised by the 68th General Assembly of the BIE on 17 November 1970. As with the first WIG, the city of Vienna organised the Expo as part of its strategy to develop green spaces in the city. 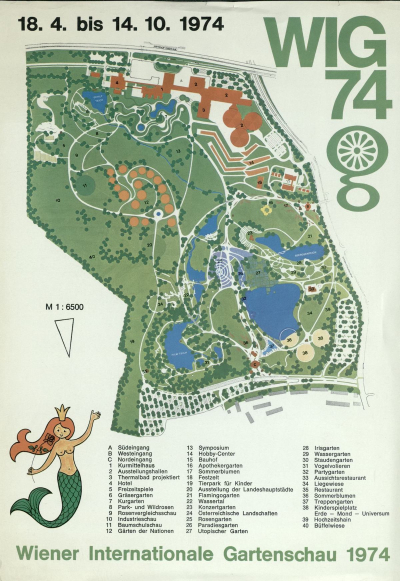 The selected area for the Expo was a derelict industrial site on the south-eastern slope of Laaer Berg near Oberlaa, which needed considerable work to be transformed into a park. Design of the site was entrusted to a team led by German landscape architect Erich Hanke, who focused on flowing shapes, undulating surfaces and motion. As sulphur had been discovered nearby, organisers opted to develop the 100ha site as a spa park (Kurpark), thus including a health centre, a thermal bath and a hotel, in addition to the gardens and exhibition areas.

WIG 1974 was opened on 18 April by President of the Federal Council Anton Benya, with the ceremony featuring performances by the Vienna Philharmonic Orchestra and the Vienna State Opera Ballet.

A total of six temporary exhibitions were held throughout the duration of the Expo, providing a highlight for visitors. The first, inaugural exhibition featured contributions from 21 countries from Europe, the Americas, Africa and Asia. In total, 30 countries participated in the Expo, with 10 designing their own gardens in the circular “Garden of Nations”.

Visitors could learn about different aspects of horticulture in the Expo’s indoor exhibitions and thematic gardens, all of which were connected via a monorail. The Water Lily pond proved particularly popular among visitors, as well as the neighbouring concert garden, where opera and music performances were regularly held. The site also featured the “Party Garden”, the “Utopian Garden”, and the “Water Valley”, as well as children’s playgrounds inspired by a space theme.

After gathering 2.6 million visitors during the Expo, the site became a public park named Kurpark Oberlaa, named after the adjacent health resort. With sunbathing meadows, a children’s petting zoo, a love garden and a flower maze, the park has a unique atmosphere in Vienna.