Theme
Progress and Harmony for Mankind

Asia’s first World Expo and its message to the world

Expo 1970 Osaka, held from 15 March 1970 to 13 September 1970, was the first World Expo to be hosted in Japan and in Asia. Under the theme “Progress and Harmony for Mankind”, the record-breaking Expo welcomed 77 participating countries and received over 64 million visitors – a figure that would not be outstripped until Expo 2010 in Shanghai.

Expo 1970 Osaka was registered by the General Assembly of the Bureau International des Expositions (BIE) on 14 September 1965, shortly after Japan became a member of the BIE. In the backdrop of the Cold War and with Japan having made significant leaps in economic development following World War II, the country sought to host an Expo to promote peace and create common ground by showcasing the global progress of technological civilisation. At the same time, the Expo aimed to address contemporary issues facing humanity such as environmental degradation and poverty.

In this context, the theme “Progress and Harmony for Mankind” was chosen. The sub-themes consisted of four pillars dedicated to holistically plan a better future with the international community:

Sprawled across 330 hectares in the Senri Hills, the Expo site was master-planned by Kenzo Tange and Uzo Nishiyama, two key figures of Japan’s 1960s Metabolist movement which saw the cities and buildings of the future as being adaptable and ever-changing. 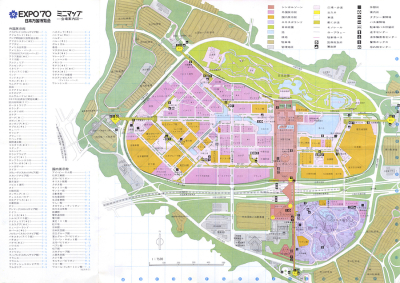 In line with this experimental spirit, the site was conceived with a central spine designed to inspire the centre of a future city. Named the Symbol Zone and spanning one kilometre long by 150 metres wide, this central axis featured the Festival Plaza, the Tower of the Sun, the Theme Pavilion, and the Expo Tower. Moving walkways extended out from the futuristic Symbol Zone to direct visitors towards the colourful and space-age pavilions around the Expo site.

The 70-metre-high Tower of the Sun, designed by Taro Okamoto, was the centrepiece of the Expo site and symbolically embodied the Expo theme. The structure was designed with four faces: the “Golden mask” located at the very top to symbolise the future, the “Face of the Sun” located in the middle of the tower to represent the present, the “Black Sun” located on the back of the tower to denote the past, and finally the “Underground Sun” located underground in the exhibition space. Inside the Tower is the Tree of Life. At 41 metres tall, this ‘Tree’ has trunks and branches, to which 292 models of living organisms are attached. It represents evolution – from the earliest form of life, from amoeba, fish, and dinosaurs, to humankind.

Of the 116 pavilions on the Expo site – encompassing countries, international organisations, local authorities, and companies – Japan’s was the largest, spanning 37,791m2 – equivalent to a ten millionth of the total area of Japan. Designed like the logo of Expo 1970 Osaka, the pavilion featured five circular buildings, which together depicted a sakura (a cherry blossom), the flower most representative of Japan. The five petals also represented the world with its five continents all joining hands. The theme of the pavilion - “Japan and the Japanese” – showed the past, present, and future ideals of the country and its citizens.

The innovative and high-tech spirit of contemporary Japan was showcased in the numerous corporate pavilions. The eye-catching Fuji pavilion – an air-inflated membrane structure – featured the world’s first IMAX, while the metabolist Takara Beautilion pavilion encapsulated the concept of impermanent, modular architecture. The Furukawa pavilion was designed as a traditional seven-story pagoda, while its indoor exhibits were unwaveringly modern, with the technologies showcased including a voice-activated robot, a cashless payment system and an electronic ‘Computer Music Hall’.

With 77 participating countries, Expo 1970 Osaka was a unique opportunity for the Japanese public to ‘travel the world’ and discover the culture, art and achievements of foreign nations. Among the most popular pavilions were those of many newly independent African and Asian countries, many of which were participating in a World Expo for the first time.

In terms of architecture, participating countries used the Expo as a test-bed to experiment with avant-garde styles, with several international pavilions gaining recognition for their bold design and engineering. The pavilion of Brazil – with a large geometrical concrete roof delicately poised atop an undulating landscape – became an icon of brutalist architecture that propelled the career of its architect, Paulo Mendes da Rocha. The pavilion of Switzerland, named “Radiant Structure”, was designed as a branching metal ‘plant’ that reflected the sunlight during the day and glowed in the dark at night, while Australia’s striking pavilion by James MacCormick featured a suspended circular roof inspired by Hokusai’s ‘Great Wave’.

Other notable pavilions included the United States’ vast pavilion, covered by an air supported cable roof, and which featured a display of the lunar module and rocks brought back from the Apollo 12 mission. Visitors were also impressed by the Netherlands’ “viewing machine” pavilion, featuring a multimedia environment that immersed the public in a groovy collage of impressionistic images.

Expo 1970 Osaka was hugely popular among the public, leaving an indelible cultural mark on Osaka and Japan more generally. Some of the technologies exhibited at the Expo soon became popularised and are now widely used across the world. Among these are the mobile phone – showcased and tried out by visitors in the NTT pavilion – as well as the popular ‘Washlet’ Japanese toilets with integrated heating and bidet functions. The experimental pavilion designs inspired architects and planners around the world, with the modular Takara Beautillion being the direct inspiration for the world’s first capsule hotel only a few years later.

The Expo contributed significantly to the urban development of Osaka and the Kansai region, propelling it to a status capable of rivalling the economic and cultural hub of Tokyo. In the run-up to the Expo, 110km of new roads were completed in the region, and key infrastructure was upgraded throughout the city. Aware that the city of the future required green areas and open space, the Expo site was transformed into a public park, where the Tower of the Sun reminds visitors of what once occupied the area. Following a refurbishment, the Tower of the Sun Museum reopened to the public in 2018, and the structure was officially registered as Tangible Cultural Property of Japan in 2020, to mark the 50th anniversary of Expo 1970.