Theme
Man and his World

From Moscow to Montreal

The Expo was originally intended to be held in Moscow and was timed to coincide with the 50th anniversary of the October Revolution. When the USSR withdrew its application in 1962, Montreal was elected to host the World Expo of 1967. The Expo was registered during the 51st session of the General Assembly of the BIE on 13 November 1962 and took place from 28 April to 29 October 1967, coinciding with the 100th anniversary of the Canadian Confederation and 325 years since of the founding of Montreal. The Expo gathered over 50 million visitors. 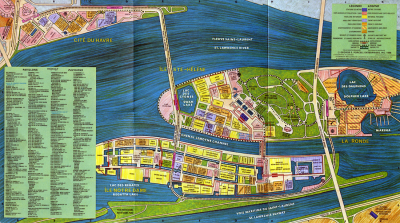 A theme to adress Man's social and environmental responsibility

The Expo’s theme was borrowed from the book « The Planet of Mankind » (« La Terre des Hommes ») by Antoine de Saint-Exupéry and addressed universal problems of humanity, following the lead of Expo 1958 Brussels. It was no longer scientific, technological and industrial progress alone that were to be presented and promoted in the exhibition, but also man's social responsibility and environmental consciousness. In compliance with the theme, the organisers scheduled many international thematic pavilions: Man and his Health, Man in the Community, Man and the Ocean, Man and the Space, Man the Creator, etc.

Discoveries and innovations from participating countries

Many nations participated with significant exhibits. France displayed discoveries from Jacques Cousteau's underwater research expeditions in the “Man Explorer” pavilion. From the Netherlands, there was a model of the Zuiderzee bay that presented advances in land reclamation. The Soviet Pavilion exhibited the original space capsule in which Juri Gagarin became the first man to orbit the earth. It attracted over 13 million visitors and was one of the greatest attractions of Expo '67. In « The Man the Creator » pavilion, 180 works of famous painters from 50 national galleries were shown. Finally, the Montreal Expo was the launch site of the IMAX, today’s most widely used system for special-venue film presentations.

Expo '67 showcased the latest architectural trends. One of the Expo's landmarks was the residential complex called Habitat-67 : 158 standard reinforced concrete apartment boxes that combined the advantages of individual houses with dense urban development. Another landmark was Buckminster Fuller's geodesic dome.

Without a doubt, Expo '67 was one of the most successful World Exhibitions. Over 50 million visitors attended it at a time when Canada's population was only 20 million, setting a per-capita record for World Exhibition attendance. Although several buildings were removed immediately after Expo 67, most of the pavilions continued on through an exhibition called « Man and His World », which opened every summer until 1981. When the exhibition was discontinued, the Expo site was incorporated into a park run by the city of Montreal, known today as Parc Jean Drapeau. Buckminister Fuller's dome, now called the Montreal Biosphere, has become the Environmental Sciences Museum; and Habitat 67 is now a condominium residence.