Theme
Man and his Work - A Century of Technological and Social Developments: Achievements and Prospects

Italy celebrated its centennial in 1961 by organising an International Labour Exhibition in the city of Turin. The city, the first capital of a unified Italy, had already hosted an Exhibition in 1911 to celebrate the 50th anniversary of Italian unification.

Recognised during the 43rd session of the General Assembly of the BIE on 5 May 1959, the Expo sought to showcase the achievements of civilization over the past century. The goal was to make science and technology more accessible to the public, and each participant country was invited to demonstrate their theme from a selection of social and technical achievements of the past 100 years.

Expo 1961 was held in the purpose-built Palazzo del Lavoro (Palace of Labour), designed by architects Luigi and Antonio Nervi. The structure consisted of 16 imposing columns that stood 26 metres tall, with a large central section hosting the Italian exhibits and peripheral sections for international participants. The Palazzo del Lavoro represented the achievements of modern labour and construction practices – the floor, columns and facades were made out of marble, cement, steel and glass, while the panels separating different sections were made from mirrored stainless steel. 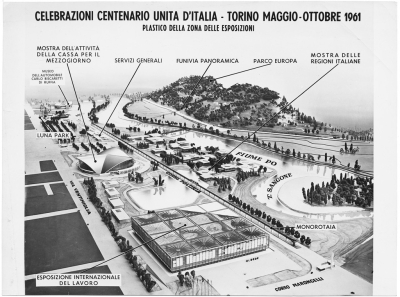 Outside the Palazzo, two major attractions that caught the attention of visitors were the cable cars and the 1.2 km Alweg Monorail. Composed of three trucks with six aisles, the 38-tonne monorail could reach a maximum speed of 90km/h. During the course of the Expo, it transported a total of 500,000 passengers. The brightly coloured cable cars transported visitors between the Expo site and the newly developed Cavoretto Europa Park, a scenic point in the hills above Turin.

A total of 19 countries participated in the Expo. The six members of the European Community at the time presented a joint exhibit focusing on “Energy Sources”, demonstrating how new technologies allow better use of energy resources. In addition to coal, gas, oil, solar and nuclear energy, the exhibit also showcased hydrographic stations, plans for the first offshore tidal power station (under construction at the time), and a reproduction of a modern mine.

The British section focused on scientific progress, with a wide range of exhibits touching on issues ranging from transportation to nuclear energy. The United States opted to showcase “Technological Progress in Industry”, illustrating the achievements made in the field of communications. One of its most memorable exhibits was a large model of the human brain that used flashes of light to demonstrate how the brain processes images and sounds.

The Italia’61 national fair took place close to the Palazzo del Lavoro, with visitors able to travel easily between the two thanks to the monorail and cable cars.

After the Expo closed its doors on October 1961, the Alweg monorail was initially set to be extended to a length of 12km and used for public transport in Turin. This project was abandoned in 1963, but some of the stations were renovated, including the North station that became the Regina Margherita Children’s Hospital.

The Palazzo del Lavoro is currently undergoing renovation and is set to open as a commercial gallery in Autumn 2019. This will form part of a surrounding complex that will also include a Ferris wheel.