Registered during the 32nd General Assembly of the BIE on 5 November 1953, World Expo 1958 Brussels was formally opened by King Baudouin on 17 April 1958, closing to the public six months later, on 19 October.

Organised under the theme “A World View: A New Humanism”, Expo 1958 Brussels was centred around both humanity and technology. Each participant showcased their technical progress as well as their achievements in terms of improving overall well-being. In the post-War context, King Baudouin proclaimed in his opening speech that “technology is not enough to make a civilisation, it requires a parallel development of our moral conceptions”.

Situated on the same grounds as World Expo 1935, the site of Expo 1958 grew to include Laeken park with the construction of a precast concrete pedestrian bridge across the park’s valley. The site thus covered 200 hectares between the Palace of Laeken and the Centenary Palace. The latter, which was initially built for Expo 1935, was reused for Expo 1958 with a temporary new façade - designed by Jacques Dupuis - featuring stars and a peace dove. Additional exhibition halls, including the Palace Nº 7 spanning 10,000m2, were built for the occasion, creating what is now the Brussels Exhibition Centre. 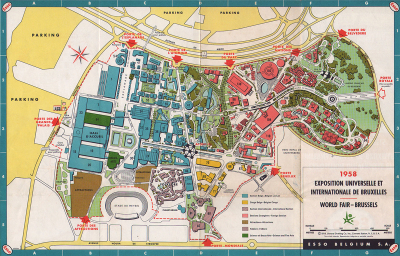 Visitors were able to easily walk around the site thanks to a large concrete walkway, or more quickly by taking trains that passed along the main thoroughfares. Alternatively, a cable car with 165 pods allowed visitors to pass over the Expo site while enjoying the views.

Throughout Brussels, improvement works transformed the city’s infrastructure, with roads widened, the creation of a new junction between the two main railway stations, the construction of new tunnels (Rogier, Stéphanie, Louise, Botanique), viaducts and motorways, as well as the installation of the city’s first heliport. In Mont des Arts, new cultural venues were created in the form of the Congress Palace (now known as Square), the Galerie Ravenstein and the building that houses the Royal Library of Belgian (KBR).

International cooperation and the foreign sections

As the first World Expo of its category to be organised after the Second World War, Expo 1958 took a strong stance in favour of cooperation. Several international palaces showcased achievements in a range of domains, with the International Palace of Art featuring “50 years of Modern Art” and the Palace of Science exhibiting scientific research on atoms, crystals, molecules and living cells. A complex including the Palace of International Organisations and the Palace of World Cooperation addressed the four global challenges of demographic progress, food, energy and transport.

Nations from around the world were represented at the Expo, with the United States, the USSR, the Netherlands and France each having the largest plots, spanning 25,000m2. The Soviet pavilion presented a replica of the country’s Sputnik satellite and Laika’s cabin, while the United States invited visitors to discover the country’s way of life through the ‘Circarama’ featuring 12 cameras and 12 screens arranged in a circle. Taking place in the midst of the Cold War, the Expo was a venue for dialogue, with the Soviet head of state, Kliment Vorochilov, travelling to the event – the first such visit to the West since 1917 - and even visiting the US pavilion.

The pavilion of Czechoslovakia, celebrated for its architecture and its content, was notable for introducing the ‘Magic Lantern’ (Laterna Magika), an experimental form of immersive theatre created by Alfred Radok and Josef Svoboda that combined film, danse, music, ballet and pantomime.

The most iconic structure on the Expo site was undoubtedly the Atomium, a gigantic representation of an elementary iron crystal enlarged 165 billion times. Standing 102 metres high, the Atomium features nine spheres connected by 3-metre-wide tubes through which Expo visitors took escalators to reach the atomic museums. Visitors were also able to travel to the top sphere - which contained a restaurant – in what was then the fastest lift in the world, going at a speed of 18km/h.

The Arrow of Civil Engineering (La Flèche du Génie Civil) was another architectural symbol of the Expo and of the possibilities of modern technologies. Designed by architect Jean Van Doosselaere, sculptor Jacques Moeschal and engineer André Paduart, the unique structure attested to the modern use of concrete and supported a walkway that allow visitors to view a giant relief map of Belgium at a scale of 1:35,000.

In the Dutch section, the Philips Pavilion appeared as a three-pronged tent, with precast concrete panels only 7mm thick hanging in tension from wire cables. Designed by Le Corbusier and Iannis Xenakis, the pavilion immersed visitors in a unique multisensory experience, mixing images and colours with Edgar Varèse’s specially composed ‘electronic poem’.

These creations, as well as other pavilions and attractions around the site, marked an abandonment of monumental symmetry, instead focusing on slants and curves. Alongside the decorative styles found in many pavilions, this trend became later known as the “58 style” in design, architecture, and the arts.

Symbol of an era

Expo 1958 Brussels played host to 450 international congresses, ranging from metaphysics to dental surgery, bringing together almost 250,000 attendees. More than 60 million man-hours were required to build the Expo, a worthwhile effort given the 42 million visitors it received, including a daily high of 715,000 visits – a record at the time.

As the host city, Brussels was transformed by Expo 1958. The Belgian capital gained the Centenary Palace complex and the Atomium (entirely renovated in 2006) as well as some reused pavilions such as the Tuillier pavilion (now a restaurant next to the Atomium) and the American theatre in Laeken park. Some notable pavilions were moved back home including Austria’s pavilion by Karl Schwanzer, now a museum in Vienna (House 21) and the Czechoslovak pavilion by František Cubr, Josef Hrubý et Zdeněk Pokorný, now situated in Prague. Other pavilions are dotted around Belgium, with the Côte d’Or chocolate pavilion now a disco in Willebroek, the Wood Industry pavilion now a sports hall in Deurne, and the Canada pavilion serving as a school in Genk.