In 1957, the International Building Exhibition, commonly known as ‘Interbau’, was held in Hansaviertel, a district of Berlin that was almost entirely destroyed in one night during the Second World War. With significant public funds dedicated to making up for the housing shortage, city and federal authorities organised the Expo to draw international attention to West Berlin and highlight its cultural capacities.

Recognised by the 38th General Assembly of the BIE on 13 November 1956, Expo 1957 had a importance in demonstrating Germany’s modernisation, and was also a manifestation of the tensions between East and West Germany. Interbau’s reconstruction plans aimed to showcase a modern, democratic West Germany, and to counterbalance the monumental structures that began to appear in East Berlin in the 1950s.

Three German architects - Jobst, Kreuer et Schliesser – were selected to draw up a framework for the new district with a range of specifications. Architects were then invited to participate in the Expo by each designing a building or an estate to be used as social housing. By the opening of the Expo in 1957, Interbau had gathered over 50 internationally acclaimed architects, including Walter Gropius, Alvar Alto, Arne Jacobsen, Oscar Niemeyer and Le Corbusier, to contribute to an ambitious urban development project. Furthermore, 10 landscape architects were selected to submit designs for the redevelopment of the district.

Le Corbusier’s contribution to the Expo proved to be somewhat controversial – his highly conceptual communal living project ‘Unité d’Habitation’ could not be accommodated in Hansaviertel. Following a series of quarrels with city authorities, Le Corbusier’s project was finally built in Charlottenburg, with construction only starting in January 1957, six months before the opening of the Expo.

The structures of IBA 57 physically embody the architectural spirit of the time, influenced by Bauhaus, functionalism and uncompromising modernity. Indeed, the organisers set out to construct a ’city of tomorrow’ with Berlin’s Tiergarten park encircled by high-rises, apartment blocks, churches, shops, a movie theatre, a library and a subway. 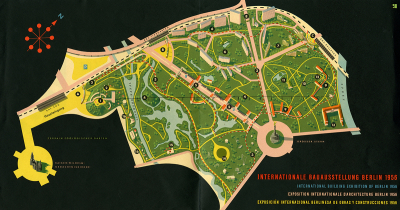 Interbau was incredibly successful in attracting Berliners, many of whom visited the Expo to apply for housing units in the building of their choice. There were a total of 1 million visitors, of which 350,000 came from East Berlin. Many of the visitors submitted applications to be housed in the future apartment blocks, which had a fixed rental price of 1.10 DM per square metre (around 19.50 euros today).

By the time the Interbau Expo ended, only 601 apartment units were completed, out of a total of 1,160. Construction of the remaining 35 apartment buildings continued until the project was completed in 1960. With the construction of the Berlin Wall a year later, Hansaviertel found itself in the shadow of the Berlin Wall. Only in 1989 did the district find itself once again at the heart of the unified city. The modernist structures that define the district are part of Berlin’s architectural heritage, with Hansaviertel coming under landmark protection in the 1990s.

In 1979, a second international housing project was launched in Berlin, aimed at carrying out ‘careful urban renewal’ and ‘critical reconstruction’. Lasting until 1987, the project was partly a response to Interbau and the construction of the post-war era. Rather than constructing new, modernist buildings, the project sought to renovate existing structures and integrate new buildings within the urban landscape.