After two consecutive years of Expos in Italy (Rome in 1953 and Naples in 1954), the 33rd General Assembly of the BIE recognised Expo 1955 Turin on 3 June 1954. The Expo was organised under the theme of Sports, an activity that was growing in social and cultural importance at that time.

The International Expo on Sport was inaugurated by Giovanni Ponti, Minister of State for Events, Tourism and Sport, under the Olympic symbol. The opening was also attended by various epresentatives from National, Regional and Local Government. In his opening speech, the Minister stated that the presence of official representatives from the Government, the Senate and the Chamber demonstrated the importance of the Expo and its Sports theme. He added that “If assertions and competitions should exist among Nations, they are in the fields of Art, Science and Sport.” 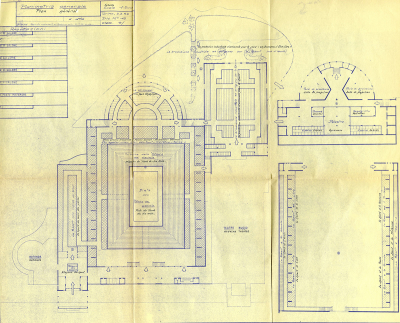 The Expo was organised under the umbrella of the Italian National Olympic Committee (CONI), with a diversified programme including sports competitions and cultural events. The latter included sports fashion shows at the Valentino Palace, as well as movie festivals and projections of sports documentaries in the New Theatre, which attracted large crowds.

Eleven nations participated in the Expo: West Germany, Austria, Egypt, Greece, Yugoslavia, Morocco, Poland, Russia, Sweden, Luxembourg and Italy. Each country had its own stand and competed for medals in a wide range of sports activities including running, gymnastics, cycling, boxing, and water sports such as rowing and powerboating.

The whole city of Turin and sports fans were involved in the organisation of the Expo. During its three-week duration, the Expo attracted 120,000 visitors, from Italy and further afield, leading to calls for another Sports-themed Expo to be organised in the city. Not included in the official tally, many locals and tourists attended various other sports events that were organised throughout the city during the Expo.