Theme
The festival of Peace

A Festival of Peace

Registered during the 22nd session of the General Assembly of the BIE on 5 December 1948, the Port-au-Prince World Expo was organised under the theme “The festival of Peace”. Expo 1949 created an opportunity for the Haitian Government, led by Dumarsais Estimé, to attract international attention to Haiti and to develop its tourism industry. 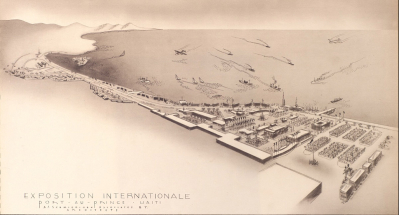 The Expo, which celebrated the 200th anniversary of the founding of Port-au-Prince, was an opportunity to modernise the city and redevelop the Gonave Bay area.

As part of its Expo preparations, in September 1947, the Haitian Government created a Department of Tourism to launch large-scale communications campaigns in the United States and across Latin America. Over a dozen new hotels were built to accommodate tourists, and the Government invested in sanitation and clean-up operations. The site of the Expo was developed on a 24 ha area along the waterfront of Gonave Bay, previously a slum, which involved dredging and the extension of the seafront.

Construction was supervised by August Ferdinand Schmiedigen, an architect from New York who had already worked for other World Expos such as Paris 1937 and New York 1939-1940. The boulevard, which was named in honour of U.S. President Harry S. Truman and which divided the Expo site, was enriched with Art Nouveau style buildings decorated with colourful frescoes depicting Haitian life. These pavilions became part of the permanent architecture of Port-au-Prince as government office buildings.

The Expo was inaugurated on 8 December 1949 with its national section together with the pavilion of agriculture, fine arts and folklore, but the international section was only opened on 12 February 1950. Numerous statues and sculptures dotted the Haitian section, which had 26 lots, and whose centrepiece was a stunning musical water fountain.

Among the main attractions of the Expo, visited by 250,000 people, were the botanical gardens, a tropical aquarium and the ‘Les Palmistes’ park, which hosted a street carnival, a Ferris Wheel and the Ross Manning Shows. Haiti was particularly proud to showcase its own culture at the Expo, with the National Folklore Troupe performing at the outdoor Voodoo Amphitheatre and an impressive display of cultural artefacts.