Theme
Building the World of Tomorrow

The success of Chicago's 1933 Expo led New York to host its own World Expo to erase the bad memories of the economic crisis. Registered by the 11th General Assembly of the BIE on 4 May 1937, the Expo praised a world of capitalism, consumerism and democracy, but was impacted by the start of Word War II overseas. Proof of its public success, almost 45 million people visited the event, however the Expo wasn't able to pay off what it had cost. 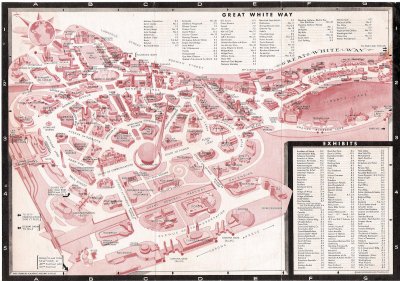 "The world of tomorrow"

Even though the Expo was held on the 150th anniversary of the government of George Washington and the new American Constitution, New York 1939 was resolutely turned towards the future. Its theme "The World of tomorrow" aimed at demonstrating the positive impact that technologies would have in the future. The Expo showcased the link between scientific progress and democracy, capitalism and consumerism and presented them as values that would guaranty a high quality of life.

The emblematic monuments of the Expo were the Trylon and Perisphere erected in the thematic area. The Trylon, designed by Wallace K. Harrison was a 212 meter-high triangular tower. Jacques Fouilhoux's Perisphere was a huge globe whose diameter measured 65 meters. Inside, visitors could discover the "Democracity" designed by Henry Dreyfuss. It was a diorama of a 2039 city that showcased a day in that city in 5 minutes.

Futurama was extremely popular. It took visitors on a ride over a huge diorama of the 1960 city. Designed by Norman Bel Geddes, it was part of the Transportation zone by General Motors. The landscape of the 1960 city was very rich: bridges and highways were very present, but nature took up one third of the attraction with parks and gardens placed on building rooftops.

The firm Westinghouse designed a 2,28 m. long and 21,27 m. large time capsule. It contained objects from daily life such as a toothbrush or a slide rule and samples of different materials such as text, film or music. Any document that needed a specific machine to be read was enclosed with the instructions to create the specific machine. The capsule was destined to be opened again in the year 6 939.

Expo New York 1939 witnessed the first ever appearance of the President of the United States on television: the opening of the Expo on April 30th 1939 by President Franklin D. Roosevelt was broadcast by the RCA on the Expo site and in Manhattan. The day after, TV stations were sold for the first time in the US.

Despite its millions of visitors, Expo 1939 experienced important financial losses. To continue paying off the costs, the organisers of the Expo decided to reopen the event in 1940.

However, at that time, World War II was well under way, and the political and military situation overseas had important repercussions on the Expo. Following Germany, who had decided not to participate to the first edition of the Expo, the USSR backed out of the event in 1940 after signing the Nazi-Soviet Pact in August 1939. Several pavilions, such as those of Poland and Czechoslovakia did not reopen. A total of 54 countries participated in the first run, which attracted 25.8 million visitors. The second opening saw 49 participants reopen their pavilions, with 19.1 million visitors.

The tensions continued even after the Expo. On 15 December 1941, 8 days after the attack on Pearl Harbour, New York destroyed the Japanese pavilion that was supposed to be a legacy of the event.

Despite the financial loss, the post-Expo was well managed

Even though the second edition of the Expo did not generate any profit, the site of the Expo is now an important part New York City. The Expo allowed the successful transformation of the Corona Dumps, an old dumpster nicknamed the "Valley of ashes" by F. Scott Fitzgerald in "The Great Gatsby." Today, the area has become the "Flushing Meadows – Corona Park" and is very much enjoyed by the inhabitants of Queens. Inside, visitors can find a museum in the former Pavilion of New York and they can also assist to the US Open.