Official Designation
International Exhibition of the Art of Water

After hosting a World Expo in 1905, the Belgian city of Liege organised a Special Expo in 1939 to celebrate the completion of the 122km Albert Canal after 10 years of work. The new Canal, which created a connection between the River Meuse and the Port of Antwerp, allowed the industrial area surrounding Liege to have direct access to overseas markets.

The idea for the Expo was born from the ‘Greater Liege’ movement in 1936, when a group of Walloon regionalists, led by Socialist MP Georges Truffaut, decided to promote a project that could bring worldwide attention to Liege and the Wallonia region. Shortly before the opening of the Expo, Truffaut stated that the event would only be the starting point of of the development and of the Walloon region.

Recognised by the 12th General Assembly of the BIE on 28 October 1937 with the theme “Water Management”, the Expo aimed to emphasise the importance of water as a tool for energy provision, development, and mutual cooperation.

The Expo site was developed on the banks of the River Meuse, with modernist architect Georges Dedoyard in charge of the overall project. The site was planned with an urbanism policy in mind, with the buildings taking into account technical, social and cultural aspects. French architectural magazine Architecture d’aujourd’hui praised the successful creation of a new district, describing the architecture as “organised grandeur.” 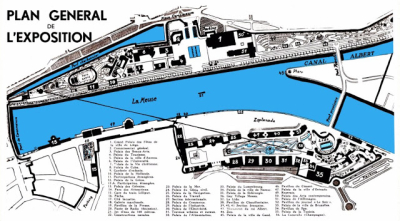 In line with the Expo’s water theme, the site featured a ‘water theatre’, where crowds could appreciate an illuminated 60-metre waterfall and a water jet rising to 100 metres. It was also the venue of several sports competitions including water polo and water jousting. A number of other sports events were held during the Expo, both water-related (water ski, synchronised swimming, boating) and on land (boxing, hockey, fencing). There were also demonstrations of aquaplanes and speedboats, as well as a yachting regatta.

As with previous Expos in Belgium, the Expo site featured its own ‘village’, complete with a church, a public square, a mini-train and a total of 30 brasseries. Other popular attractions at the Expo were the ‘Lido’, which offered a spectacular performance of colourful water displays, and a theme park with water rides and a cable car crossing the Meuse.

Eight countries had pavilions at the Expo – Germany, Egypt, France, Luxembourg, Norway, the Netherlands, and Sweden. The French and German pavilions were the two most prominent international pavilions, facing each other down in a reflection of the political tension of the time. The German Pavilion, which was designed by Emil Fahrenkamp, was inspired by Germany’s symbolic pavilion at the 1937 World Expo in Paris. It was built entirely with material sourced from Germany, using German workers who travelled from their home country every day.

An early end to the Expo

Initially set to run until November 1939, the Expo closed its gates on 2 September, following the outbreak of war in Europe.

Despite its cheerless ending, a large part of the Expo site was later transformed into an area of social housing for the city, known as Droixhe. The urbanisation of the site was facilitated by the forward thinking of Expo planners, as the landscaping, roads and parks were already in place.