First envisioned in 1929, World Expo 1937 Paris was registered by the 6th General Assembly of the BIE on 23 October 1934, with the theme “Arts and Techniques in Modern Life”.

Initially planned to cover only 30 hectares, the Expo with its 45 international participants ultimately spanned 100 hectares, including the Trocadéro, the Champ de Mars, and the quays of the Seine between the Bridges of Alma and Passy. 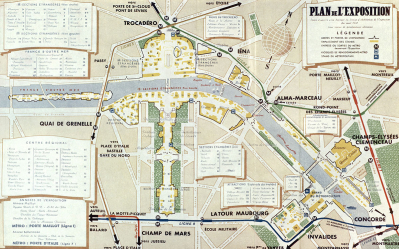 Major construction work accompanied the Expo project, including the widening of the Iéna bridge, the covering of the Invalides railway line, the construction of pedestrian and traffic bridges, the redesign of the Trocadéro (dating from Expo 1878) with the installation of luminous fountains, and the construction of several buildings. Among these were the Palais de Chaillot, designed by Léon Azéma, Jacques Carlu and Louis-Hippolyte Boileau, and the National Museum of Public Works, designed by Auguste Perret but not fully completed until after the Expo, in 1946. Other structures built for the Expo include the Palais des Musées d'Art Moderne, built on a former military site and now hosting the Museum of Modern Art of the City of Paris and the Palais de Tokyo contemporary art centre.

Meanwhile, the western wing of the Grand Palais, built for Expo 1900, was converted into the Palais de la Découverte, a science museum, under the leadership of André Léveillé and the Nobel Prize winner Jean Perrin. The Eiffel Tower, built for Expo 1889, was also modernised for the occasion with new lighting installed and the remodelling of its first floor and restaurants.

Initially scheduled to be inaugurated on 1 May 1937, it was not until 24 May that the President of the Republic, Albert Le Brun, declared the Expo open, surrounded by representatives of 50 countries. The gates were opened to visitors the following day, but with the exception of some foreign pavilions including those of Germany and the USSR, many pavilions still required finishing touches to be made.

Work on the Expo began on 18 November 1935, but delays would characterise the organisation of the event, due to changes in leadership and location, floods and strikes, which compounded the ongoing economic crisis, political turmoil and international tensions that were characteristic of the period.

Participation was significant nonetheless, with 44 countries participating in the foreign sections situated on the Chaillot hill between the Seine and the Trocadéro. Thirty-seven countries had notified the French Ministry of Foreign Affairs of their participation before the summer of 1936. Germany, meanwhile, was hesitant, only giving its confirmation in October 1936.

Built above the underground passage on the Quai de Tokyo, two pavilions marked by their imposing neoclassical architecture faced each other down and symbolised the confrontation of powers. Germany’s pavilion, designed by Albert Speer and standing 54 metres high with the emblem of the Reich at its peak, was directly opposite the pavilion of the USSR, designed by Boris Iofan, and which featured the Worker and Kolkhoz Woman sculpture by Vera Mukhina, the People of the USSR frieze by Joseph Chaikov depicting the 11 Soviet nationalities, and the dates 1917-1937.

Taking place in the context of the Spanish civil war and the advance of General Franco’s nationalists, the pavilion of Republican Spain was also symbolically and politically significant. Designed by Luis Lacasa and Josep Lluís Sert, the three-storey rationalist glass building contained the works of avant-garde artists commissioned to make the pavilion an expression of affirmation and resistance. Picasso thus created Guernica, painted between 1 May and 4 June 1937 and standing 3.5 metres high by 7.8 metres wide, while Julio González created La Monserrat, Alexander Calder the Mercury fountain, and Joan Miró The Reaper. Each work of art was in line with the Don Quixote quote that adorned the pavilion’s stairs “On doit exposer sa vie pour sa liberté” (“For Freedom…life should be ventured”).

In addition to the monumental permanent buildings, modern architecture was showcased at Expo 1937 Paris, as seen in the pavilions of Electricity, National Solidarity, Hygiene, Tobacco and Coffee of Brazil (designed by Robert Mallet-Stevens), the Union of Modern Artists (designed by Pingusson), Japan (designed by Junzō Sakakura) or Finland (designed by Alvar Aalto). After creating the Pavillon de l’Esprit Nouveau in 1925, Le Corbusier once again demonstrated his leading role in modern architecture by creating the significant Pavillon des Temps Nouveaux.

An Expo for the people

The content and programming of Expo 1937 Paris reflected the cultural policy of the Front Populaire government, elected in 1936. The World Expo was seen as a tool to democratise access to culture, media, and science. The latter was evident in the Palais de la Découverte, created to make science accessible to all, while popular media was presented in pavilions dedicated to cinema and radio, among others. The Minister of National Education and Fine Arts, Jean Zay, oversaw a major public procurement programme to foster cultural creation, leading to hundreds of commissions for the Expo, notably from avant-garde artists such as Fernand Léger, Auguste Herbin, and Robert and Sonia Delaunay. The latter two decorated the Aviation pavilion and the Railway pavilion with large murals. In a similar manner, Léger adorned the Palais de la Découverte with Transport des Forces, and Raoul Dufy created the immense 60-metre-long La Fée Électricité for the Electricity pavilion.

The influence of the Front Populaire’s ideas was also on display within a series of temporary pavilions dedicated to key issues, such as Peace (designed by Albert Laprade and Louis H. Bazin), Education (designed by Éric Bagge), National Solidarity, Hygiene (designed by Robert Mallet-Stevens) and Labour (under the responsibility of the CGT trade union). To facilitate visits from people of all backgrounds, entrance tickets were available at a reduced price one day per week (Monday), and people were also encouraged to visit as a result of the annual leave ticket, introduced by the Government a year earlier.

By the time it closed on 25 November, Expo 1937 Paris had received over 31 million visits, in addition to more than two million visitors for the Palais de la Découverte alone. Following this success, the French government planned to reopen the Expo the following year, but the Senate voted against the proposal.

Dedicated to progress, innovation and art, Expo 1937 Paris was a singular reflection of the inter-war period. In the last volume of the general report, the Commissioner General Edmond Labbé summarised the event as having been “a beneficial oasis, an oasis of peace”.